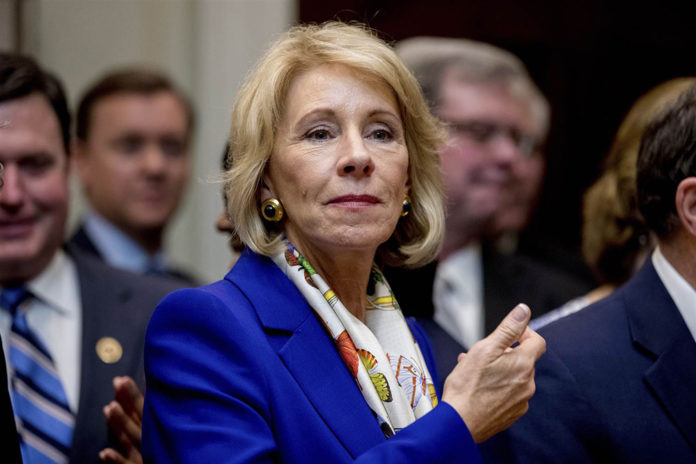 Education Secretary Betsy Devos is expected to resign from her position due to lack of influence, AlterNet reports.

The Secretary has been the subject of public outrage time and time again. Most recently, she decided to roll back protections for disabled students. It has been reported that her department is reconsidering loan forgiveness for students defrauded by for-profit colleges.

She may be vacating her office, but unfortunately, it won’t be for her attacks on integral policy.

A sprawling profile published by Politico details DeVos’ numerous political failures as head of the department.

Thomas Toch, director of the independent education think tank FutureEd, told Politico that DeVos was ignorant of the job’s constraints when she accepted it and insiders are already preparing for her to vacate the position.

What a familiar story! Billionaire assumes top government position, expects to run the government like a business, push through legislation without resistance, and reform the regulations to suit his/her will. Said billionaire cannot accomplish such tasks to the extent that he/she pleases because even billionaires are not immune to the rule of law.

In DeVos’ case, she is incompetent. She is unaware of the basic policies. She failed to convince Congress to approve the Education Department’s budget request (which would have slashed funding to other programs in the name of expanding school choice funding).

“She can’t fill her senior staff slots. Morale is terrible at the department.” – Toch to Politico

During her confirmation hearing earlier this year, DeVos was criticized for her lack of basic knowledge about education policy. She blames President Donald Trump’s transition team, claiming that she was “uncoached.”

“I’ll tell you, in Washington education circles, the conversation is already about the post-DeVos landscape because the assumption is she won’t stay long. I think she’s been probably one of the most ineffective people to ever hold the job.” – Toch

“If there’s one thing DeVos has learned so far, it’s that getting your way in Washington requires time, patience, and government savvy – three things she does not have.” – Toch