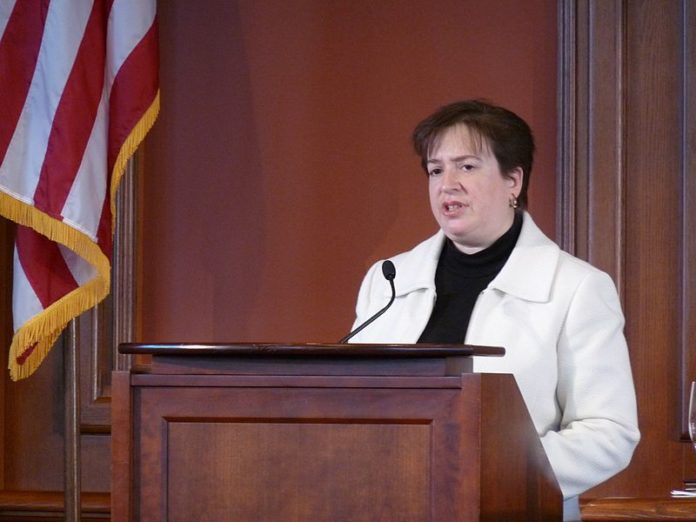 Supreme Court Justice Elena Kagan took her conservative colleagues to the woodshed on Thursday in a scathing dissent condemning their decision to support Republican gerrymandering to rig elections for themselves.

In a stunning setback for democratic governance, the conservative majority decided to allow pervasive gerrymandering by Republicans to continue unabated even though they use it to pick their voters to guarantee they remain in power forever with no hope that a challenger could oust them.

And considering Republicans are doing this partly by excluding people of color from their districts, they are effectively suppressing their votes.

And it’s only going to get worse because the high court’s conservatives don’t care, meaning Chief Justice John Roberts politicized the Court.

Kagan fired back in a dissent that will shame these five conservatives for generations to come because they have stolen democracy from the people.

“Of all times to abandon the Court’s duty to declare the law, this was not the one,” Kagan wrote. “The practices challenged in these cases imperil our system of government. Part of the Court’s role in that system is to defend its foundations. None is more important than free and fair elections. With respect but deep sadness, I dissent.”

Democracy is what separates us from authoritarianism but by giving Republicans the go-ahead to do it with impunity, the conservative majority has decided democracy no longer matters to them.

“The partisan gerrymanders in these cases deprived citizens of the most fundamental of their constitutional rights: the rights to participate equally in the political process, to join with others to advance political beliefs, and to choose their political representatives,” Kagan continued before going on to blast the conservative wing of the Court for promoting partisanship.

In so doing, the partisan gerrymanders here debased and dishonored our democracy, turning upside-down the core American idea that all governmental power derives from the people. These gerrymanders enabled politicians to entrench themselves in office as against voters’ preferences. They promoted partisanship above respect for the popular will. They encouraged a politics of polarization and dysfunction. If left unchecked, gerrymanders like the ones here may irreparably damage our system of government.

Kagan made it clear that today’s gerrymandering goes far beyond what the Founding Fathers could have ever imagined, which makes it far more of a threat.

“The majority’s idea instead seems to be that if we have lived with partisan gerrymanders so long, we will survive,” she wrote. “[T]he effect is to make gerrymanders far more effective and durable than before, insulating politicians against all but the most titanic shifts in the political tides. These are not your grandfather’s — let alone the Framers’ — gerrymanders.”

She concluded by predicting that it will only get worse as computers and analytics improve, making it possible for Republicans to rig elections on a surgical level not seen before to keep themselves in power.

Clearly, the Supreme Court is an arm of the Republican Party. It is a threat to our Republic and the Constitution. It no longer works for the people, nor does it protect the Constitution. It works every day to undermine it in the name of political dominance. It has made itself irrelevant and it is time to either impeach them, or add more Justices to the bench along with limiting how long a Justice can serve. Because our country is being strangled by five conservative men who don’t give a damn about their country.

And the worst part is that this would never have happened if Republicans had not stolen a Supreme Court nomination from former President Barack Obama in 2016.