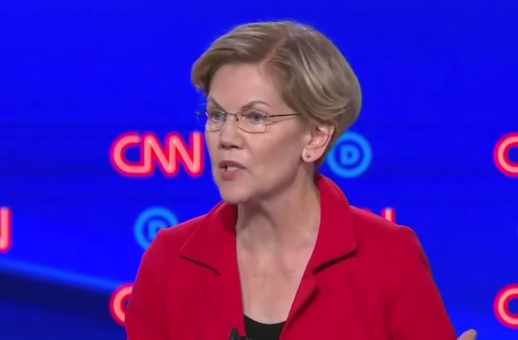 Senator Elizabeth Warren (D-Mass.) came out swinging in support of universal healthcare, also known as Medicare for All, during the second round of primary debates on Tuesday night.

During the debate, former Rep. John Delaney (D-Md.) had the gall to attack Medicare for All by arguing that supporting it is “political suicide,” which also just happens to be a Republican talking point.

Well, Warren did not appreciate a Democrat using Republican talking points to attack fellow Democrats, and she let him have it.

“Look, let’s be clear about this,” she began. “We are the Democrats. We are not about trying to take away health care from anyone. That’s what the Republicans are trying to do. And we should stop using Republican talking points in order to talk with each other about how to best provide that health care.”

The audience applauded her response, and then she told the story of Ady Barken, a man who has ALS and good insurance, but even his good insurance isn’t enough to cover his medical expenses.

“Now I want to have a chance to tell the story about my friend Ady Barken,” Warren said. “He is 35 years old. He has a wife Rachel and a cute little boy named Carl. He also has ALS and it’s killing him, and he has health insurance, good health insurance and it’s not nearly enough.”

“This isn’t funny,” she continued. “This is somebody who has health insurance and is dying. Every month he has about $9,000 in medical bills that his insurance company won’t cover. His wife Rachel is on the phone for hours and hours and hours begging the insurance company please cover what the doctors say he needs. He talks about what it’s like to go online with thousands of other people to beg friends, family, and strangers for money so he can cover his medical expenses.”

The point of her story is that private healthcare is not working for Americans anymore. The private system is greedy and jacks up costs for that very reason, pricing most Americans out of the healthcare they need, forcing them to choose between bankruptcy or saving their lives.

“The basic profit model of an insurance company is taking as much money as you can in premiums and pay out as little as possible in health care coverage,” Warren concluded. “That is not working for Americans. Medicare for All will fix that and that’s why I’ll fight for it.”

The rest of the developed world has universal healthcare systems, and it’s far less expensive than what Americans pay. One American in Taiwan went to the emergency room earlier this year and came out with only an $80 bill. A similar emergency room visit in America would have cost thousands upon thousands of dollars. Private healthcare in the United States is simply a cruel and unsustainable system that needs to be replaced with a government system paid for through taxes similar to how Social Security and Medicare work. Democrats should be fighting for that, and Warren most certainly will.