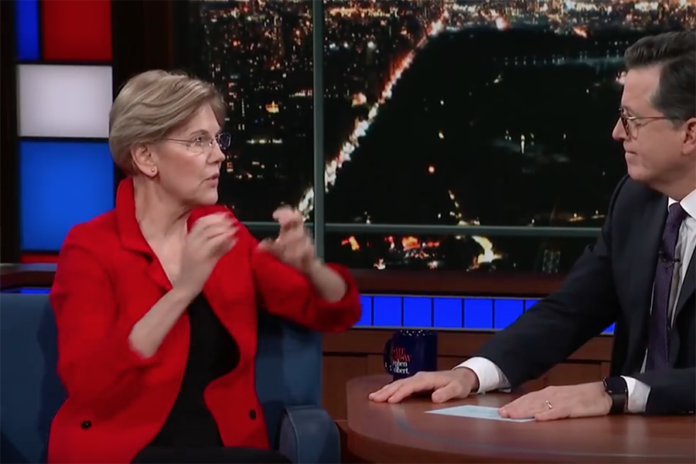 Warren, quick-witted as ever, took a few moments to destroy Donald Trump before moving on to her talking points. Watch the video below.

“Donald Trump was not President of the United States the last time that you were on,” said Colbert after informing Warren that she was on his show last over a year and a half ago.

Warren was quick on her feet.

“I remember those days,” she responded nostalgically, to quite a round of laughter from the audience. “How long has he been president?” she asked.

“There were dog years, and now there are Trump years,” said Warren.

Trump years indeed! Colbert noted that while usually the presidency ages the president, in the case of Donald Trump, we’re the ones getting older the longer that he’s in office.

How true! Donald Trump may have been elected one year ago, but the man has only been in office for ten months. It feels like he’s been in the White House for ten years.

Even after coining the phrase “Trump years,” Warren wasn’t finished roasting the president. Colbert showed her a recent tweet where Trump referred to Warren as “Pocahontas.”

Here’s what she had to say about that:

“Donald Trump thinks if he’s gonna start every one of these tweets to me with some kind of racist slur here, that he’s gonna shut me up, it didn’t work in the past; it’s not going to work in the future.”

Notable is that Trump referred to Warren as Pocahontas just days after his administration announced the beginning of Native American Heritage Month.

Warren is up for reelection in 2018, and she urged the audience to stay politically active and to pay attention and put up a fight, despite the fact that “Trump years” are overwhelming.

“Look, we’ve got to be really careful here. I get the point about Trump years and what this feels like right now. But we’ve got fights in front of us right now. We can’t play this game of every four years we’re gonna get focused and we’re gonna get active in politics. Right now, right now – I mean like this past week and the week coming up. We’ve got to fight on taxes – where the Republicans are trying to push through a tax bill that has a trillion-and-a-half dollars in giveaways for giant corporations, for billionaires, and they want to pay for it by having working families’ taxes increased.”

“I don’t believe one middle-class person in America should have her taxes raised in order to do tax giveaways to billionaires and giant corporations.”

That is called integrity! We love Elizabeth Warren!