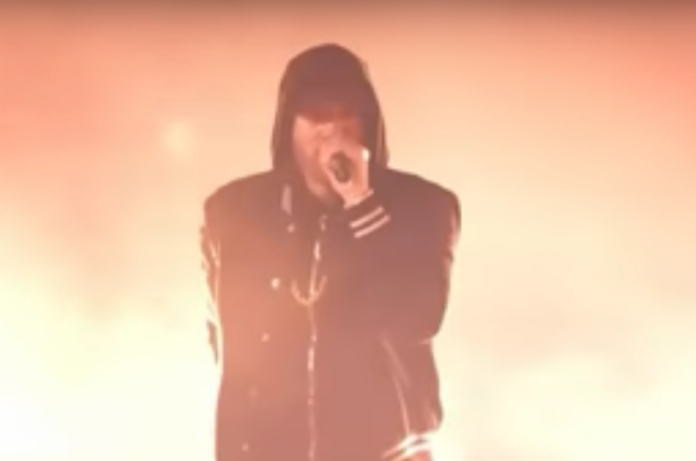 Legendary rap artist Eminem dove into politics Sunday, something he does quite often these days. This time, Eminem took aim at the National Rifle Association (NRA) in the wake of President Donald Trump bowing down to the gun lobby’s demands.

Rather than follow through on placing age restrictions on purchasing assault weapons and creating a universal background check system that closes various gun-buying loopholes, President Donald Trump focused his proposal on arming teachers, an idea that received serious backlash since he first mentioned it last month after a gunman killed 14 students and three staffers at a high school in Parkland, Florida.

Educators, parents, students, and law enforcement voiced opposition to putting more guns in schools, but the NRA supports the idea; likely because they will profit mightily from increased gun sales and training fees.

In fact, it could cost taxpayers up to $1 billion a year to arm teachers in every school across the country.

Basically, Trump retreated from serious gun control and obeyed the NRA, which recently filed a lawsuit against Florida for passing gun control measures.

And Eminem was NOT impressed.

During an appearance at the iHeartRadio Music Awards in California, Eminem was introduced by fellow rapper Big Sean and Parkland survivor Alex Moscou before proceeding to rip the NRA to shreds with brand new lyrics from his latest song Nowhere Fast.

This whole country is going nuts, and the NRA is in our way

They’re responsible for this whole production

They hold the strings, they control the puppet

And they threaten to take donor bucks

They love their guns more than our children.

This isn’t the first time Eminem criticized Trump, whom he seemingly referred to as a “puppet” in the lyrics if you didn’t catch it.

In an interview with Billboard Magazine earlier this year, Eminem had strong words for Trump and talked about how he doesn’t care if Trump supporters are mad because he would rather do the right thing instead of trying to retain part of his fan-base by not speaking out. Eminem said:

“At the end of the day, if I did lose half my fan base, then so be it, because I feel like I stood up for what was right and I’m on the right side of this. I don’t see how somebody could be middle class, busting their ass every single day, paycheck to paycheck, who thinks that that fucking billionaire is gonna help you.”

Right now, millions of kids, students, teachers, and parents realize that Trump and Republicans in Congress aren’t going to do anything concrete to stop gun violence and prevent future mass shootings. Instead, Trump is putting all of their lives in danger by putting guns in classrooms at the behest of the NRA, a major donor to his 2016 campaign.

In the end, the only real way to make the bleeding stop is to get out and vote in November this year and in 2020.