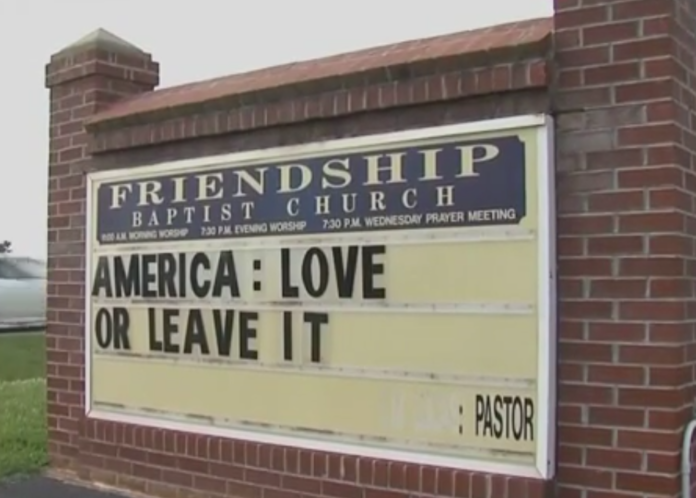 President Donald Trump’s racism is so poisonous that even preachers are repeating it in church. But as one Virginia pastor found out, real Christians don’t tolerate such hate.

E.W. Lucas is the pastor of Friendship Baptist Church in Appomattox, not far from the site where Confederate General Robert E. Lee surrendered to Union General Ulysses Grant in 1865, thus bringing the Civil War to an end.

But as Lucas and Trump have clearly demonstrated over the last week, racism did not end with the Civil War, and my be stronger in our country today than it has been in decades.

Just over a week ago, Trump told four Democratic congresswomen of color to go back to the countries they came from even though three of them were born in America and all four are American citizens.

….and viciously telling the people of the United States, the greatest and most powerful Nation on earth, how our government is to be run. Why don’t they go back and help fix the totally broken and crime infested places from which they came. Then come back and show us how….

Basically, Trump is accusing these lawmakers of hating America even though they don’t, and that has resulted in chants of “send her back” at his rallies when he attacks Rep. Ilhan Omar (D-Minn.) and use of the phrase “Love it or leave it” being said to anyone who opposes Trump and his agenda.

In response to Trump’s racist words, Lucas plastered the “Love it or leave it” phrase on the sign outside his church and doubled down during an interview with KCRA.

“People that feel hard about our president and want to down the president and down the country and everything, they ought to go over there and live in these other countries for a little while,” he said.

Of course, Lucas is an old white guy. But his congregation did not appreciate him repeating Trump’s racism, which has made national headlines and has become embarrassing to the congregants.

In fact, they oppose the sign so much that they walked out of church en masse on Sunday, leaving the church empty during the 11am service.

This is the hate that Trump is perpetuating across the nation as he questions the patriotism of Democrats who oppose him and are criticizing America’s systemic racism and inequality because they believe America can and should be better. There is nothing unpatriotic about criticizing the country and making an effort to transform it fundamentally. Even the founding fathers agreed that dissent is patriotic and they themselves changed America fundamentally by writing the Constitution. Over the centuries, America has been transformed time and time again despite people like Trump trying to demonize change in defense of an unsustainable status quo.

Those who are on the wrong side of history always lose. Just ask Robert E. Lee. Lucas learned that the hard way on Sunday. Trump and the Republican Party will learn the same lesson in 2020.