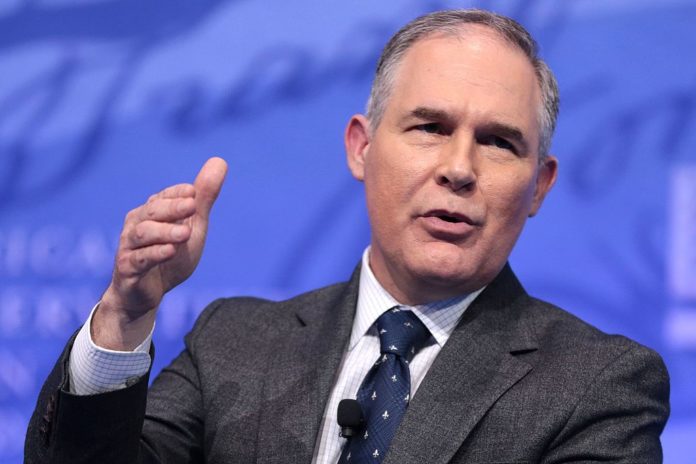 EPA Administrator Scott Pruitt, who is rumored to be one of President Trump’s favorite cabinet members, may have sealed his fate with his excessive spending and new revelations of his renting a room in a condo owned by an energy lobbyist’s wife.

“Pruitt’s lease at a Washington apartment owned by a lobbyist friend allowed him to pay $50 a night for a single bedroom — but only on the nights when he actually slept there.

“White House officials are growing dismayed about the questions surrounding Pruitt’s living arrangement, including his initial inability to produce any documentation about his lease or his actual payments, according to three officials. The landlord provided EPA officials with a copy of the lease and proof of the payments Pruitt made.”

This comes on top of revelations that Pruitt repeatedly flew first class on commercial airlines and then billed the federal government for those expensive flights.

The condo in question is owned by healthcare lobbyist Vicki Hart, who is married to energy lobbyist J. Steven Hart.

Bloomberg obtained checks written by Pruitt for use of the condo, and what they found is said to have angered the president and other senior staffers:

What has drawn the most interest — from Pruitt’s critics and the president — is the appearance of the spending on flights and condo rentals. Environmental Integrity Project director Eric Schaeffer noted that it shows very poor judgement by the EPA chief:

“At the very least, it doesn’t look good for the administrator of EPA to have rented an apartment from the wife of an energy industry lobbyist who represents companies regulated by EPA.”

Especially when Pruitt has been an eager advocate for rolling back environmental regulations at a record pace, leading some to suggest that Pruitt’s real goal is to destroy the EPA at the expense of the environment.

Pruitt’s name repeatedly comes up whenever scenarios are raised regarding the possible removal of Jeff Sessions as Attorney General. Under such a plan, Trump would dismiss the current AG and replace him with Pruitt, who served in the same position for the state of Oklahoma.

But these new reports could wind up costing Pruitt his job at the EPA. Trump has already fired his Health and Human Services Secretary, Tom Price, for extravagant spending on travel and charter flights. Could that same taste for luxury be what winds up getting Pruitt booted, too? Keep and eye on the president’s Twitter feed for the answer.