The United States Blues
Home National News Eric Holder Schools Trump: ‘I Had A President I Did Not Have... 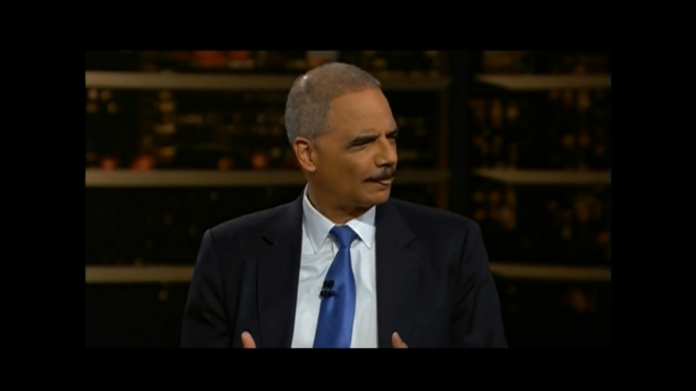 Former Attorney General Eric Holder is tired of President Trump’s repeated attacks on the current AG, Jeff Sessions, and he’s reminding Trump what the Department of Justice is supposed to do.

Appearing on Real Time With Bill Maher Friday evening, Holder brought up Trump’s comments about how Sessions should have “protected” him the way Holder did President Obama. To that, Holder noted:

“The difference between me and Jeff Sessions: I had a president I did not have to protect.

“So, this notion that I am somehow protecting Obama from things that he had done inappropriately or illegally is simply not true.”

Just this week, Trump again attacked Sessions and the Department of Justice via his favorite social media platform, Twitter:

Why is A.G. Jeff Sessions asking the Inspector General to investigate potentially massive FISA abuse. Will take forever, has no prosecutorial power and already late with reports on Comey etc. Isn’t the I.G. an Obama guy? Why not use Justice Department lawyers? DISGRACEFUL!

Historian Jon Meacham, who was also a panelist on Bill Maher’s weekly show, also weighed in on the president’s repeated attacks on the DOJ:

“It’s a very Fox-centric view of the world. There was so much churning of the Obama administration and all these manufactured scandals throughout the years that I’m sure that’s kind of an ambient noise in his head.”

That led Holder to add that President Obama had to deal with repeated racist attacks from various hate groups during his eight years in office. Trump, on the other hand, is in a mess of his own creation, and has no one to blame for his situation but himself.

In December of last year, Holder replied to Trump’s tweet on his expectation of “loyalty” from Sessions by reminding him that the attorney general serves the Constitution, not the president, posting this:

Wrong/dangerous. Trump doesn’t have absolute rights with DOJ. But women and men there have ABSOLUTE duty to follow Constitution and rule of law – not a man. Career DOJ people have ABSOLUTE right to defy illegal orders. And they will. I know them.