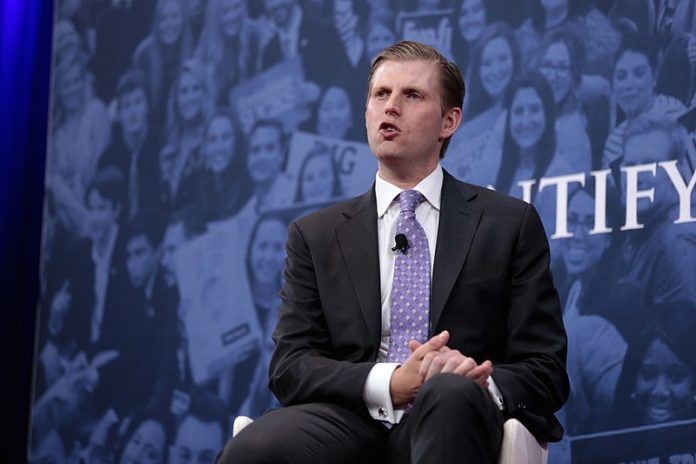 Eric Trump would have been wise to keep his nose out of George Conway’s marriage to his wife Kellyanne Conway. Instead, he proved beyond a shadow of a doubt that he’s the dunce of the family.

Kellyanne Conway is President Donald Trump’s White House counselor, but her husband frequently exercises his right to disagree with and criticize him.

His most recent criticism is that Trump appears to have violated witness tampering laws when he praised associate Roger Stone for refusing to cooperate with Special Counsel Robert Mueller. All Conway had to do is cite the law itself.

Conway’s tweet follows criticism of trump’s appointment of Matt Whitaker as Acting Attorney General, which he argues is unconstitutional.

Eric Trump, of course, does not like George Conway’s criticism of his father and had the gall to accuse the longtime lawyer of disrespecting his wife in every way by doing so.

Of all the ugliness in politics, the utter disrespect George Conway shows toward his wife, her career, place of work, and everything she has fought SO hard to achieve, might top them all. @KellyannePolls is great person and frankly his actions are horrible.

This tweet is out of line. George Conway has every right to criticize Trump. While his wife works for Trump, he does not. And her job does not mean he has to remain silent.

Furthermore, the Conways’ marriage is their business and theirs alone. Eric Trump has absolutely no right involving himself.

But he did, and the Internet lit him up for it, especially since Eric’s dad completely treated his mother like sh*t.

By the time the following video had been shot, Trump had been accused by Eric’s mother of a brutal rape & of sexually assaulting another woman.

The son of a man who cheated on every wife he’s ever had, and the brother of a man who has had a divorce just this year, does not get to talk about how other people’s husbands are assholes… so, ya know, sit down Eric, no one likes you or cares what you have to say

Remember when your father tweeted this? https://t.co/GrjfNjyKvW

Yep. You’re the dumb one, for sure.

It seems someone is trying to sow discord between a husband and wife. That’s disturbing.

Eric, I’ve been reading his tweets. Can you point to a specific one where you think he has been disrespectful to Kellyanne Conway, her career or her workplace? Honestly, seems you’re just mad because he’s pointing out your father’s violation of the law.

Actually Eric, you’re disrespecting @KellyannePolls by assuming that she isn’t strong enough to stand by her opinion while her husband offers a differing one. Neither of them are sheep blindly following each other.

Wait, remind me, which of Conway’s wives did he cheat on…and which mistress did he payoff, publicly, right after having a newborn son? Yeah, it must be hard for you to see so much ugliness in other people’s families. I agree that asshole should probably resign or something huh?

Not sure the scion of @realDonaldTrump should be lecturing about how men should respect their wives.

I mean there is no thread long enough for this level of absurd hypocrisy, but my advice is just to delete your account now because this is not going to turn out well.

How the hell does Eric Trump know @gtconway3d has “utter disrespect” for his wife? Who the hell is he to think he knows what goes on in Kellyanne Conway’s home?

And final question: Has Eric Trump forgotten who his dad is? https://t.co/oiydG2IalN

Eric Trump should have kept his mouth shut, but he chose to stick his foot into it instead.