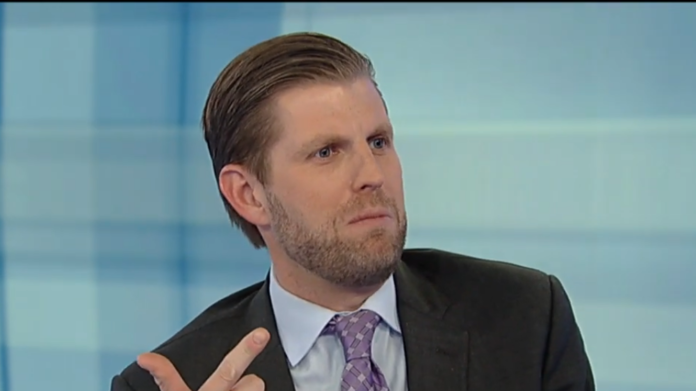 President Donald Trump’s son, Eric, made an appearance on Sean Hannity’s Fox News show Tuesday evening, deriding Democrats as “almost anti-American radicals” and predicting that his father will declare a national emergency in an last-ditch effort to get his border wall built.

Eric began his comments by telling Hannity that the Democratic agenda is “insane.”:

Ironic that a Trump would refer to “law and order” when his father has repeatedly attempted to interfere with the Russia investigation, attacked the FBI and Justice Department, and sought to obstruct justice on multiple occasions.

When the discussion turned to the wall, Eric said he hopes his father will declare a national emergency in the days ahead if no deal is reached with Congress for funding to build the long-promised wall on the Southern border:

Members of the president’s own party say the idea of declaring a national emergency for the purpose of the wall is a bad idea. Senator Marco Rubio (R-FL) commented:

“I hope he doesn’t do it. It’s just not a good precedent to set in terms of action. It doesn’t mean that I don’t want border security ― I do. I just think that’s the wrong way to achieve it.”

A national emergency declaration would likely be challenged in court, too, meaning that Trump still wouldn’t be able to begin construction of his long-promised vanity project.