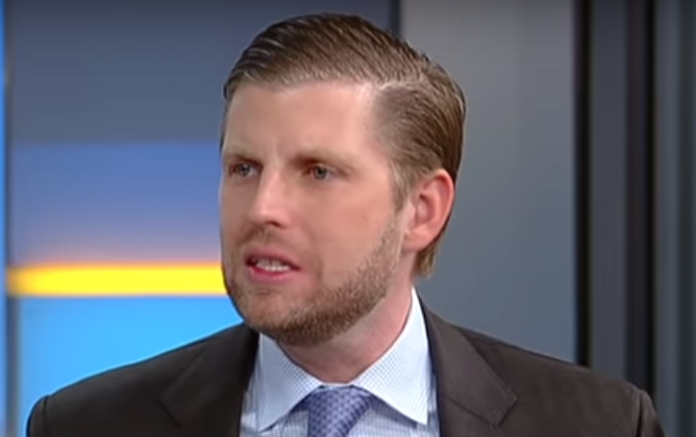 Following the revelation that President Donald Trump spends 60 percent of his time in “executive time,” which comprises Twitter tantrums, watching Fox News and doing a whole lot of nothing, his son Eric Trump whined on Fox & Friends Tuesday morning by telling one easily debunked lie.

Eric Trump appeared to blame Washington for his father’s failure to get a border wall even though the buck stops at the president’s desk, and insisted that his dad is working so hard that he hasn’t left the White House in five weeks.

“Washington is so incompetent,” Trump said. “My father’s out there, he’s doing everything he- he hasn’t left the White House in five weeks.”

Eric Trump falsely claims his dad “hasn’t left the White House in 5 weeks.” (He posted a photograph of himself golfing in Florida with Tiger Woods last weekend!) pic.twitter.com/Elzb4PzgPu

The problem is that’s a provable lie.

For instance, Eric Trump is going to be shocked to learn that his dad vacationed at Mar-a-Lago and played golf just this past weekend in Florida. Donald Trump even posted a photo of it on Twitter.

Oops. That doesn’t look like the White House to me.

Getting ready to go on stage at the #AFBF100 in New Orleans – packed house! I will try and match the great game played yesterday by the New Orleans Saints and their incredible QB, Drew Brees. People here are very excited by the team. Going on stage now! https://t.co/ytZv0HLYun

Then there’s this video Trump posted of himself at the border in Texas to promote his wall on January 10th.

From the Southern Border…. pic.twitter.com/Vgsf5nEZUH

Nope, still not the White House.

In addition, Trump has also been to Dover, Delaware, Arlington National Cemetery in Virginia and the Martin Luther King memorial within the last five weeks. So, he has definitely left the White House.

And it’s not like Trump has been working in the White House while he’s there. After all, he spends most of day in “executive time,” which is basically Trump’s fancy way of saying he wants to be lazy instead of doing his job.

Eric Trump must be desperate to counter the claim that his dad is lazy, but he only undermines his argument by lying.