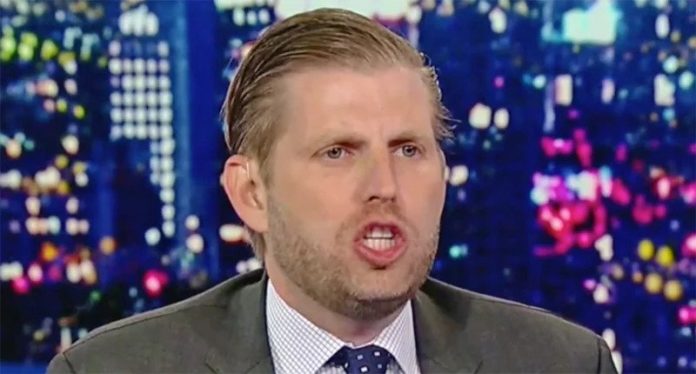 Due to his utter lack of understanding when it comes to how reporters do their jobs, Eric Trump finds himself as the butt of a joke of his own creation.

Eric got upset when an employee of the Trump Organization received an email from Pulitzer Prize-winning journalist David Fahrenthold of the Washington Post. In the email, Fahrenthold introduced himself and gave the employee his contact information.

But to hear Eric tell it, Fahrenthold had crossed some professional line ethically, referring to the “tactics” used by the Post reporter. The original message is also included with Eric’s remarks:

These are the tactics used by the @WashingtonPost. @JeffBezos – you should be very proud… 🙄 pic.twitter.com/9RO91n7XGX

What tactics is he referring to? The fact that Fahrenthold sent a professional sounding email informing someone of how they can reach him if they need to? That’s right out of Journalism 101.

It didn’t take long before Eric was given a hearty Twitter comeuppance:

You really are the dumb brother…. https://t.co/h77H9vbzZa

Honesty, courtesy & professionalism. Which includes ethics & integrity.
No wonder these *tactics* offend you so much, since they are anathema to the Trumps! https://t.co/nsm3f4OaaQ

It’s a shame this polite and professional email didn’t meet your family’s high standards for journalism.https://t.co/7dYQbMlgel

It’s a shame this polite and professional email didn’t meet your family’s high standards for journalism.https://t.co/7dYQbMlgel

this is why they call you the dumb one eric