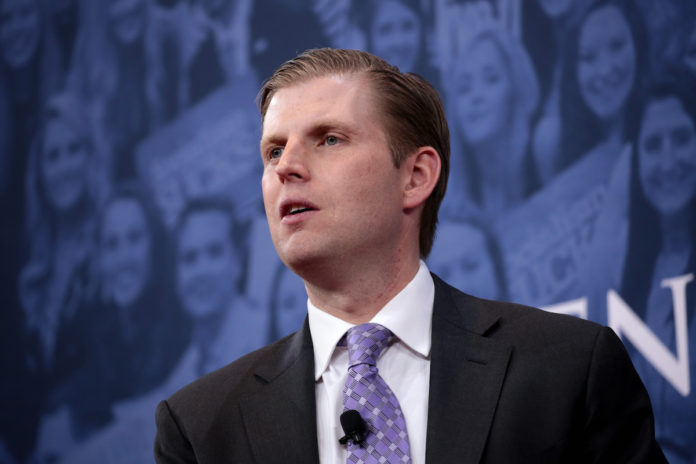 Eric Trump, son of President Donald Trump, shares less of the spotlight than his elder siblings Ivanka and Donald Jr. but has lately enjoyed celebrity of a different variety.

According to USA Today, Eric posted a photo of a Jeopardy! question on Twitter, featuring him and his brother-in-law, Jared Kushner.

Always fun being a #jeopardy question. 🛎: Who is “brother in law.” 🇺🇸🤛 pic.twitter.com/nBEiI8VZmK

The internet wasn’t having it, according to USA Today’s report:

“Twitter had fun with Trump’s tweet. Many took to the reply section to send up the Trump family in light of an ongoing investigation into a possible connection of Russian interference in the 2016 election and the Trump campaign.”

What is cell mate?

Some tweets noted Jared Kushner’s legal troubles. Reports recently surfaced of Kushner being seen as a pawn by the Saudi government, and Kushner has been accused of conducting state business through private channels, much to the ire of then-Secretary of State, Rex Tillerson.

Are you sure you want to remind people of how much Jeopardy your brother-in-law is in?

And some tweets simply went for the jugular.

According to USA Today, Eric Trump’s answer was correct by Jeopardy! standards:

“We checked with Jeopardy!, and Trump did indeed give the right answer regarding his brother-in-law Jared Kushner for the $600 clue under the category ‘Relationships are hard.’ The phrasing ‘Who/what is?’ does not matter, as both would have been accepted. And the lack of hyphens and a question mark would not work against him in a verbal response.”

However fun it was to crack jokes, many have criticized the use of social media by the first family, and view it as a sinister method to garner affection and cover for the malfeasance of the White House.

Some examples include Donald Trump, Jr. using his own daughter to prove a point to socialists, Ivanka Trump using a smooth tone and on-brand messaging to push her products while papering over White House issues, and Jared Kushner using WhatsApp to talk to the Crown Prince of Saudi Arabia outside of official channels.

While Jeopardy! may be just a game, the amount of trouble that the Trump family and associates are in is not.