The United States Blues
Home Elections Eric Trump: My daddy has the support of ’95 percent of this... 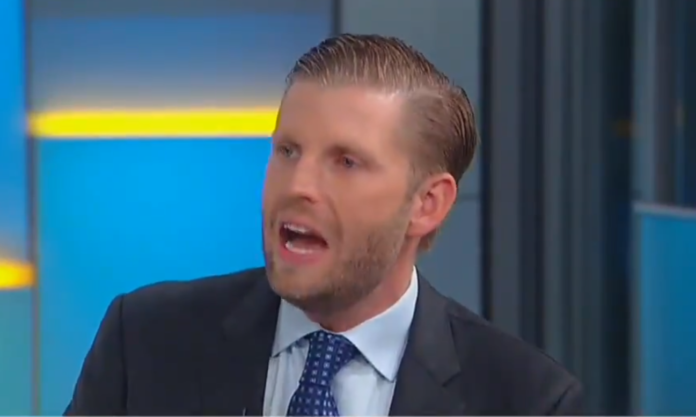 Eric Trump, much like his father, President Donald Trump, is terrible with facts, polls, and anything else that has even a hint of reality.

The president’s son was a guest on “Fox & Friends” Wednesday morning, and he proudly declared that Americans overwhelmingly support his daddy. How many of them? Well, according to Eric, at least 95 percent:

ERIC TRUMP claims on Fox & Friends that “95 percent of this country” is behind his father’s message. (His approval rating is actually about half that.) pic.twitter.com/wm27V1MMLj

Indeed, people do love this nation, but the vast majority of them don’t like the clown now leading it. The polls clearly show that, so one wonders what corner of Fantasyland Eric got his specious figure from.

Since he was elected, Donald Trump has had the lowest approval rating of any modern president since polls were in invented. According to the RealClear politics aggregate of all the major polls, Trump’s approval rating currently stands at 44.6 percent. Even among Republicans, the president’s approval rating is 74 percent, which is a full 21 points lower than Eric’s ludicrous claims.

Of course, Eric isn’t the only member of the Trump family that loves to quote fake polls.

The president decided to tweet out his current approval rating based on a poll from Rasmussen, which is notoriously skewed to favor Republicans:

New Poll: The Rasmussen Poll, one of the most accurate in predicting the 2016 Election, has just announced that “Trump” numbers have recently gone up by four points, to 50%. Thank you to the vicious young Socialist Congresswomen. America will never buy your act! #MAGA2020

The only numbers that matter are the ones that are totaled in 2020 on Election Day. If Trump can’t recreate his miraculous sweep of those Midwestern states he barely won in 2016 — Michigan, Ohio, Pennsylvania, and Wisconsin — he can’t get to 270 electoral votes, and he won’t be reelected.