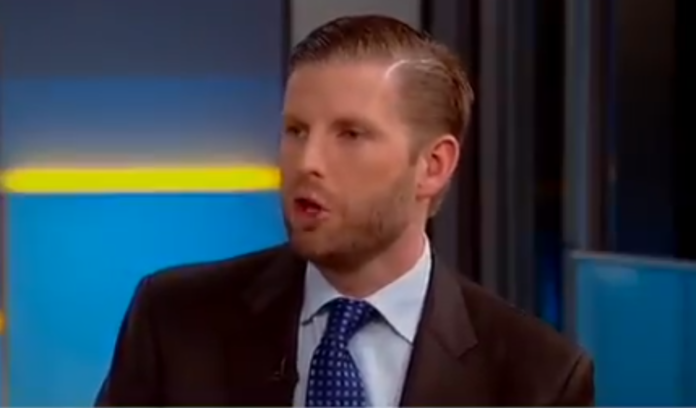 According to Eric Trump, son of President Donald Trump, the family has every right to keep the his father and the Trump Organization’s financial records hidden from Congress, but the reason he gave makes it sound like his half-sister, Tiffany is fond of day drinking.

“The federal suit was filed in Manhattan against Deutsche Bank and Capital One in an attempt to block the financial institutions from complying with congressional subpoenas issued earlier this month by the House Intelligence and Financial Services committees. Democrats, fueled by the conclusion of special counsel Robert Mueller’s inquiry into Russian interference in the 2016 election, have been using their legislative muscle to continue their own investigations of Trump and his family, much to the ire of the president.

“’The subpoenas were issued to harass President Donald J. Trump, to rummage through every aspect of his personal finances, his businesses and the private information of the president and his family, and to ferret about for any material that might be used to cause him political damage,’ the suit, filed in the U.S. District Court for the Southern District of New York, says. ‘No grounds exist to establish any purpose other than a political one.’

But during an appearance on “Fox & Friends” Tuesday morning, Eric Trump had this to say about the lawsuit:

Yikes! That’s going to make the next family get-together even more awkward than usual.

Once again we see that the entire Trump family has plenty to hide. If they didn’t, they’d gladly hand over the bank records, confident that they’ve done nothing wrong.

No one cares how many beers Tiffany Trump has. But if the president has financial connection to countries such as Russia or Saudi Arabia, we all have a right to know so we can make an informed decision when we cast our votes in 2020.