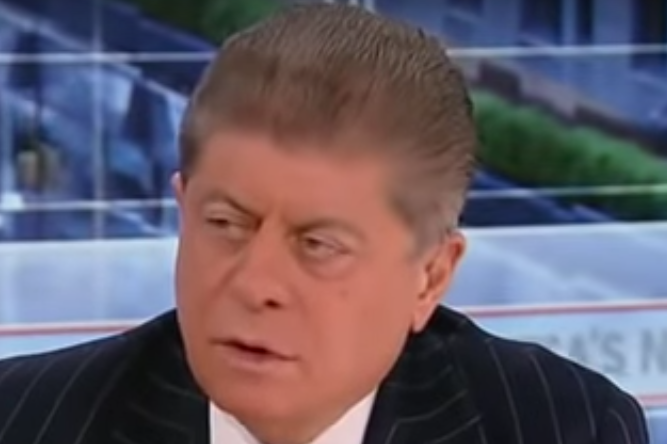 As President Donald Trump and his legal team continue to panic and make excuses for campaign finance felonies he directed his former lawyer Michael Cohen to commit, even Fox News legal analyst Andrew Napolitano thinks Trump will be indicted and that the evidence must be strong.

On Friday, it was revealed that the Southern District of New York charged Cohen with the crimes stemming from paying hush money to Stormy Daniels and Karen McDougal in order to cover up extramarital affairs Trump had with both women, news of which would could have derailed his 2016 campaign for the presidency.

The court filing dropped like a bombshell on top the White House, and Trump has been frantically attacking the charges and Special Counsel Robert Mueller ever since, including on Monday morning when he solely blamed Cohen for the felonies and claimed that the campaign finance violations are not even crimes.

Legal experts have been schooling Trump in response all day, and now Napolitano is doing the same on Fox News.

First, Napolitano blew a hole in Trump’s claim that he’s not liable for the actions of his attorney.

“The most dangerous, to the president, filing last week was the filing by federal prosecutors here in New York, professional prosecutors, not Bob Mueller’s team, saying that Trump paid Michael Cohen to commit a crime,” he said. “Now under the law that would make Trump as criminally liable as Michael Cohen. So if you pay me to shoot somebody and I shoot them, you’re as liable as if you pulled the trigger. That’s a basic principle of law.”

Indeed, Cohen also has tapes of himself discussing the payments with Trump, which is pretty damning evidence right there. And that may not be all of it.

The former judge also pointed out that the filing, in which Trump is referred to as “Individual 1” and explains that Trump coordinated with and directed Cohen to commit the felonies, comes from the professional prosecutors of the Southern District of New York, and that they must have seriously solid evidence to make such allegations against the president.

Napolitano also commented on Rudy Giuliani’s claim that the campaign finance violations are not crimes, noting that Giuliani should know better because he once led the SDNY office, an office that has an impeccable prosecution record. And the crimes Cohen committed for Trump are certainly felonies according to the law.

The judge warned Giuliani and Trump not to keep playing with fire, lest they get burned more than they have already been.

“I believe the president and Rudy mock the government at their peril. That’s how serious these allegations are,” he said, concluding that a sitting president can be indicted.