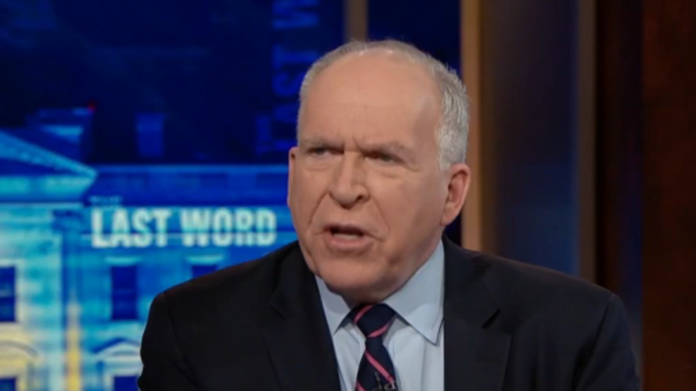 Brennan appeared on “The Last Word” Monday evening and was asked by host Lawrence O’Donnell about a tweet he sent out over the weekend. Here’s the tweet:

Your cabal of unprincipled, unethical, dishonest, and sycophantic cronies is being methodically brought to justice. We all know where this trail leads. If your utter incompetence is not enough to run you out of office, your increasingly obvious political corruption surely will. https://t.co/S6DMeGICXZ

What does Putin have on @realDonaldTrump, politically, personally or financially?

Those tweets led O’Donnell to inquire:

“Do you think this country’s going to get the answer to all three of those if there is something that Putin has on Donald Trump politically, personally and financially?”

“Well, I certainly hope so, and I believe that Bob Mueller has been masterful in terms of how he has pulled together these indictments

“I think we have to think about it as a multi-act play, and I do think we are coming closer to the final act, where he is building up to the indictments that are going to be, I think, the most profound, and the ones that are going to tie it together.”

Does that mean Brennan expects another round of indictments? O’Donnell wondered. Brennan said he did:

“I do think that Robert Mueller is going to try to bring this to some type of closure in the coming months, and I would find it very hard to believe that other indictments are not going to come down, again, based on my reading of all the details in those indictments.”

Those indictments could well contain the names of Donald Trump Jr., Jared Kushner, and other top campaign officials who had contacts with Russia during the 2016 race for the White House. And that would place the president in one hell of a quandary: Does he pardon members of his family or risk seeing them indicted, tried, and potentially sent to prison for decades?