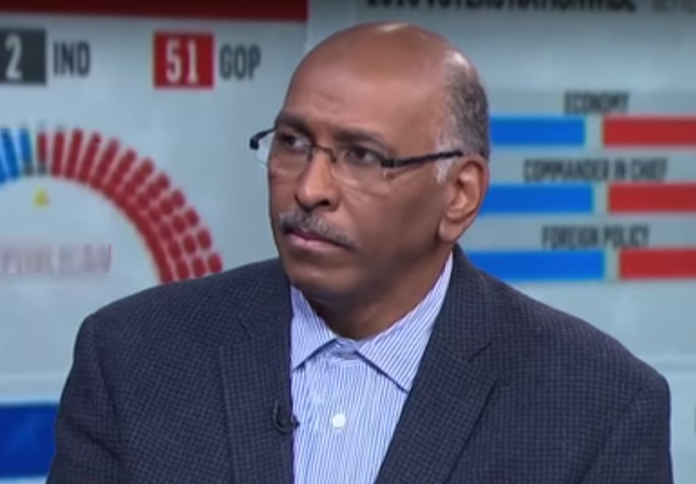 Former RNC chairman Michael Steele threw the book at Republicans for going along with President Donald Trump’s racism on Tuesday as voters across the country get in line at the polls.

This election season has lasted for two years as Trump has held rally after rally in a non-stop campaign since 2016, throughout which he has gone from blowing a racist dog whistle to using a racist bullhorn.

And Republicans have not only refused to condemn his racism, they’ve adopted it in their own campaign strategies.

During an appearance on “Morning Joe” Tuesday, Steele slammed his party for being Trump’s racist lap dogs.

“Everybody is following Donald Trump’s lead,” host Joe Scarborough began. “They’re lying through their teeth, they’re spreading the big lie. They are attacking non-white people, and Donald Trump has chosen, he has chosen to choose racism over a strong economy.”

Steele noted that Republicans could run on the economy even though the economic numbers we are seeing right now are a continuation from the Obama administration, but they’ve decided to abandon that messaging in favor of racism instead:

“They’ve fallen into this bucket where they feel they can peddle, or at least stay silent on, inherent racism, misogynistic language and bad behavior,” Steele said. “Somehow they think the American people are going to sit back and go, ‘Yeah, we want more of that.’ This election is going to be a very important tell as to which direction the American people want us to go. Based on the fact pattern right before us now, I think today could be a bigger, have a bigger impact in the long run than anything we’ve seen.”

Scarborough responded by pointing out that most Americans would not tolerate such behavior from their children, but they are somehow just fine with Trump doing it as president.

“I mean, have they read the Beatitudes lately?” Scarborough said. “I’m serious, one by one by one, have they read the story of the Good Samaritan? Have they gone to Matthew 25? Again, I’m not preaching here, this is basic stuff. This is like saying George Washington was the first president of the United States instead of the 37th. This is basic stuff for anybody that’s ever opened a Bible.”

Steele went on to note that Trump won’t take any responsibility if Republicans lose big. He’ll blame anyone and everyone else but himself even though he’s the one who lied over 6,000 times in two years and ran a campaign of hate and fear that alienated millions of Americans and energized minority voters to stand in line to vote for Democrats no matter how long it takes.

Democrats are poised to win big on Tuesday night, and if they do it would be a major rejection of Trump and Trumpism. But until Americans get rid of Trump in 2020, he’ll just keep sowing division and hate with his violent and racist rhetoric.