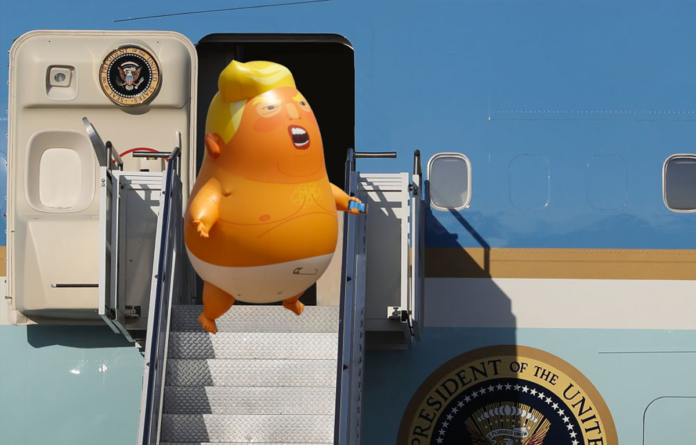 Today, Trump stood before the White House to declare a national emergency. The idea of an emergency should bring to mind an unavoidable conflict, yet Trump stood with a surreal and stoic calm. It was another indescribably disturbing Trumpian moment.

“We’re going to be declaring a national emergency, and it’s a great thing to do.”

Trump acknowledged the “emergency” would be called to secure funds for a border wall and deliver his signature [and racist] campaign promise.

Trump’s calm manner in declaring a self-imposed emergency echoed the seemingly detached way in with Senate Majority Leader McConnell delivered the news that he would once more spinelessly bend to Trump’s move.

On the Senate Floor on Thursday, McConnell spoke matter-of-factly about the bill that would not fully fund his wall.

“I had an opportunity to speak with President Trump and he, I would say to all my colleagues, has indicated he’s prepared to sign the bill,” Senate Majority Leader Mitch McConnell said on the Senate floor on Thursday. “He will also be issuing a national emergency declaration at the same time.”

The way these two Republicans announced the “emergency” certainly underscores how there is no authentic crisis, just the one manufactured by Trump and enabled by Mitch McConnell.

To add insult to injury, Twitter users are pointing out that Trump plans to head to his country club, Mar-a-Lago, right after his surreal speech in front of the White House. The hashtag #FakeTrumpEmergency trended across Twitter, as Americans express their outrage of such blatant abuse of power.

A Washington correspondent for the Toronto Star, Daniel Dale, posted Trump’s public schedule, showing his intentions to cry wolf and take off for more executive time in the sun. He will be leaving after 4 p.m. Others chimed in noting the irony of heading out for Florida for the weekend.

Trump tomorrow: Declares national emergency in the morning, heads to Mar-a-Lago in the afternoon

Trump’s immediate response to declaring a national “emergency” is to jet to Florida for a weekend of golf at his private resort. https://t.co/YhjWw5z9ga

Meanwhile, former Secretary of Labor, Robert Reich, compared Trump’s declaration to the actions of a dictator.

A president who claims he has an absolute right to declare a national emergency and spend government funds that Congress has explicitly refused to appropriate for the ends he seeks, is assuming the role of a dictator.

As Trump takes off for Mar-a-Lago, he leaves America in a state of crisis, not due to immigration, but due to his dangerous presidency.

Authoritarians throughout history have used manufactured crises to circumvent the legislative process and consolidate their own power. We must remain vigilant. These are perilous times for our democracy.

Reich also pointed out the insane hypocrisy of Mitch McConnell, who called it a “power grab” when Democrats wanted a National Holiday for voting, but now enables Trump to abuse the presidency with this power grab.

So let me get this straight: Declaring Election Day a national holiday would be a "power grab," but declaring a national emergency over a manufactured crisis is totally fine?

As writer Jess Dweck sums it up: