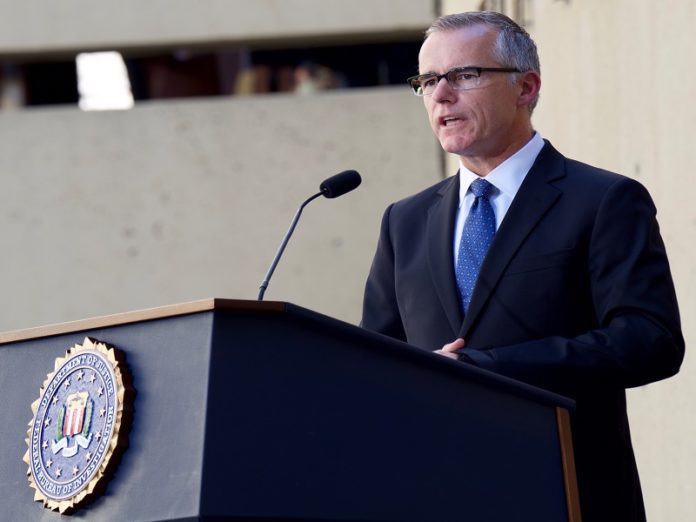 In this week’s episode of “What the Hell Did He Do Now,” Secretary of State Rex Tillerson was among the latest members of the Trump Administration to be voted off the island. The turnover in this chaotic and truly abnormal White House is unprecedented, as anyone with an iota of competence and decency is jettisoned for incompetent loyalists.

It appears FBI Deputy Director Andrew McCabe might be next.

The Washington Post reports that the FBI office that handles employee discipline recommended that Attorney General Jeff Sessions relieve McCabe of his position. Reports of McCabe’s firing come amid allegations that he authorized the disclosure of sensitive information to a reporter and misled investigators when asked about it.

Firing McCabe would not only signal yet another sign of dysfunction in White House run amok, but the firing could come before McCabe’s eligible for his pension.

McCabe, who stepped down from his role FBI  Director in January, technically remains an employee of the FBI. Having worked for the  FBI since 1996, McCabe was looking to retire in the days ahead when he’s eligible for his full pension benefits.

“The Department follows a prescribed process by which an employee may be terminated. That process includes recommendations from career employees and no termination decision is final until the conclusion of that process. We have no personnel announcements at this time.”

President Trump has leveled perpetual petty attacks on McCabe in Trump-y fashion, so it would seem he’s bound to jump at the opportunity to fire the former No. 2 FBI official. In fact, our man-baby President appeared to taunt McCabe in a tweet from late last year.

If the FBI fires McCabe with just days to go before his official retirement, it could give the appearance that it’s capitulating to a very vindictive president.

Featured image by the FBI via Wikimedia Commons/Public Domain.