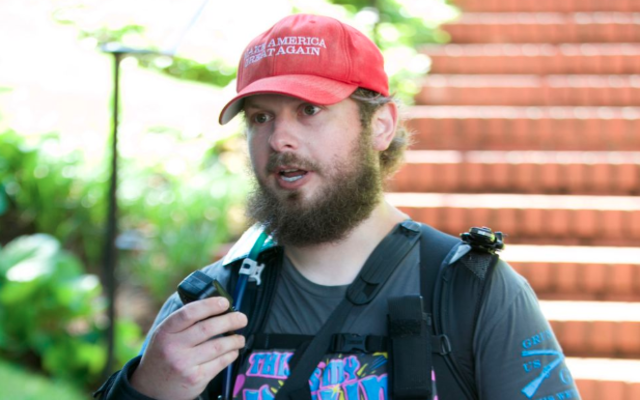 The FBI, using a “red flag” law recently passed in the state of Oregon, seized the guns of an ex-Marine who threatened to “slaughter” Antifa demonstrators at a rally in Portland earlier this month, according to The Oregonian:

Shane Kohfield stood outside the home of Portland’s mayor in July wearing body armor and a “Make America Great Again” baseball cap, a large knife strapped to one shoulder and a copy of his concealed weapons permit displayed on the other.

Using a loudspeaker, he warned the right-wing activists who turned out to condemn the city’s handling of recent violent demonstrations that they needed to protect themselves against their anti-fascist, or antifa, rivals.

“If antifa gets to the point where they start killing us, I’m going to kill them next,” Kohfield, 32, said. “I’d slaughter them and I have a detailed plan on how I would wipe out antifa.”

Kohfield served two tours of duty in Iraq and was also taken to a VA hospital for evaluation. He was released after 20 days. He wasn’t charged with a crime, but he was forbidden to attend the Portland rally staged by the white nationalist group Proud Boys.

Speaking with The Oregonian, Kohfield — who suffers from bipolar disorder and PTSD —  said he understood why his guns were transported from him and he was taken to a hospital:

“I looked unhinged. I looked dangerous and have the training to be dangerous.”

The red flag law in Oregon — which President Donald Trump has said he supports at the national level — allows law enforcement to take proactive moves to prevent violence before a crime is ever committed.

Michael German, a retired FBI agent and fellow at the Brennan Center for Justice at New York University Law School, said the case of Kohfield suggests that law enforcement is getting more aggressive in its moves to prevent mass shootings such as the ones that recently took place in El Paso, Texas, and Dayton, Ohio:

“Clearly, this latest incident shows how effective proactive policing can be in reducing the chance of violence.

“It also makes you wonder if they’d been proactive from beginning whether all of this would have grown into the menace it has become.”