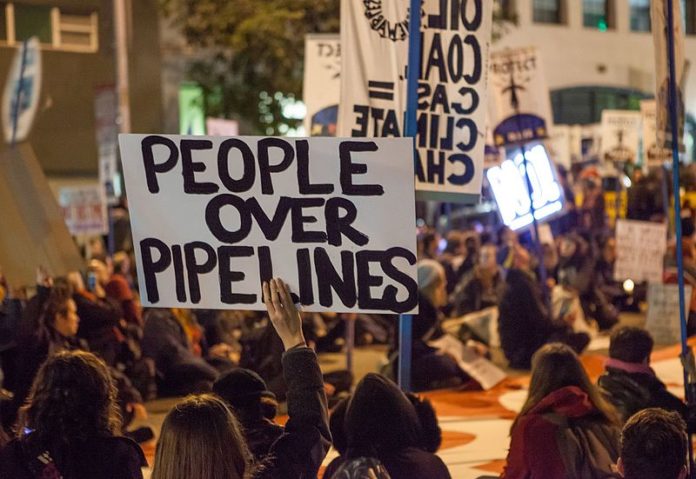 Republicans in states across the country think they can suppress peaceful protest by passing laws criminalizing it with up to 25 years in prison. On Wednesday, a federal court struck down one such law in South Dakota.

The right to protest is enshrined in the Constitution as part of the First Amendment. As such, it may not be criminalized, but the fossil fuel industry has been scheming with Republicans to pass so-called “riot boosting” laws to make it a crime to protest in any way against oil and gas pipelines and just about any other protests Republicans want to suppress.

South Dakota was one of the first red states to pass such a law in a clear effort to punish Keystone XL pipeline protesters who are made up of Native Americans and environmentalists.

The law would have subjected each protester arrested under the law to a maximum penalty of 25 years in prison, one-third of the average human life-span just for exercising a constitutional right.

Thankfully, U.S. District Judge Lawrence Piersol struck that law down this week in a ruling that is being hailed by environmental and civil rights groups.

“Imagine that if these riot boosting statutes were applied to the protests that took place in Birmingham, Alabama, what might be the result?” Piersol asked in his ruling. “Dr. King and the Southern Christian Leadership Conference could have been liable under an identical riot boosting law.”

But Piersol, as should every judge in this nation, knows that the right to protest is protected free speech in the Constitution. It cannot be criminalized no matter how much Republicans want to extinguish it.

“The so-called ‘Riot Boosting’ Act was clearly intended to suppress constitutionally-protected, peaceful protests of the Keystone XL pipeline,” ACLU senior attorney Stephen Pevar said. “We’re glad the court recognized that these vague and overbroad laws threaten the First Amendment rights of South Dakotans on every side of the issue.”

Texas recently passed a similar law earlier this year, and if this ruling is any indication, it’s going to be struck down as well unless conservative judges decide to join the scheme to undermine the very Constitution they swore to uphold.

For now, this ruling in South Dakota is a victory for constitutional rights and a huge loss for President Donald Trump and Republicans who are beholden to Big Oil.