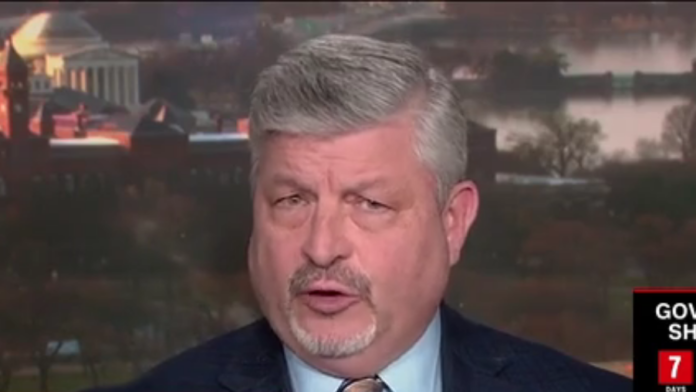 The head of a union representing federal workers slammed President Donald Trump on Saturday for his “disgusting” use of employees as pawns so he can try and extort billions of dollars for his wall on the Southern border.

Tony Reardon, president of the National Treasury Employees Union, was a guest Saturday on CNN, he made it clear he blames both Trump and Congress, which remains under GOP control until January 3. Reardon commented:

When the discussion turned to an email from the federal Office of Personnel Management urging furloughed federal workers to talk to their landlords about doing painting or carpentry work around their apartments if unable to pay the rent, Reardon made no secret of his feelings on the matter:

“I think it’s laughable, I think it’s unfortunate. It’s disgusting, candidly. In fact I heard from one of our members who indicated to me yesterday ‘maybe I’ll work my shift’ because she is required to work right now through this shutdown, though she’s not being paid.”

The union chief then noted:

“‘Maybe I can work my shift and talk to my landlord after I get off of my shift and see if I can go do painting or carpentry work or something else that maybe I can use to try to reduce my rent.’ I’ve got to tell you, to treat federal employees this way and to tell them somehow they should not have the dignity they should already have, to not provide them that dignity and respect too, provide them the pay that they have earned, it’s wrong to treat human beings this way.”

But as usual, Donald Trump cares only about himself, and his Republican enablers are too spineless to call him out and pass a continuing resolution that would end this stalemate. Instead, we have people unable to pay their rent or mortgage or feed their families. Meanwhile, this president demands money he’s never going to get for a wall that’s never going to be built.