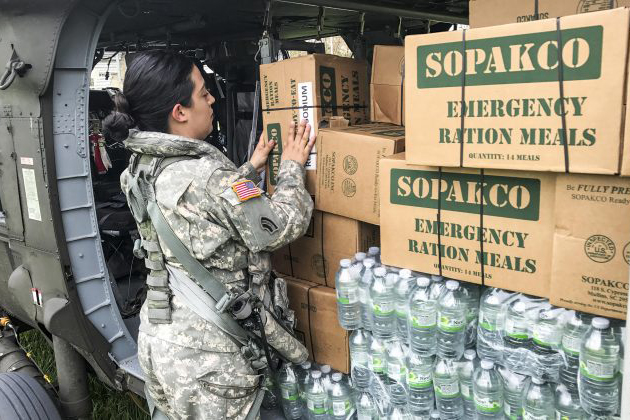 Army officials will begin withdrawing federal troops from Puerto Rico, according to NPR.

Currently, there are 11 thousand troops on the island. That number is down from the more than 15 thousand troops present shortly after the hurricane. Over the next few weeks, the number of federal troops will drop to about half of the current number. Those responsibilities will be handed over to National Guardsmen.

Federal emergency relief efforts on the island are coming to a close despite the fact that many areas still do not have access to running water and electricity.

A Mountain Town Left Behind

In a community around 40 miles from San Juan, Army Reserve soldiers hand out meals and cases of water at distribution points to aid residents who are still without power. The only source of electricity remains at the distribution point, where power is supplied by emergency generators.

Naturally, residents are frustrated by the slow pace of recovery. Morovis mayor Carmen Maldonado asked for additional help from federal officials this week, calling access to water “the critical issue” in the community. According to Maldonado, at least 400 elderly and bedridden residents aren’t able to carry home the cases of water they need.

Puerto Rico’s water authority has been working on fixing the issue but has not provided Maldonado with an estimate of how long the process is expected to take. Buchanan argues that his authority only goes so far – he can help restore electricity to the pumps, but can’t do much about longstanding structural issues with the water system.

The economy in Morovis remains at a standstill. The city will lose 80 jobs at the paper mill, which is relocating due to storm damage.

Maldonado worries that mountain towns like Morovis are being neglected because their populations are smaller than places like San Juan.

12 families in the town remain without homes and are being sheltered at Guerrero High School in Morovis.

FEMA says it’s sending a team to help the dozen families find temporary housing. The mayor wants to reopen the schools. This will only be possible with housing available and water service restored.

“It’s a very sad situation because we are as important as any citizen in another municipality.” – Moldonado

How can our President sit in the White House knowing that the situation remains so dire in Puerto Rico? These are American citizens. And regardless – nobody should be living without access to power and drinking water in the year 2017.