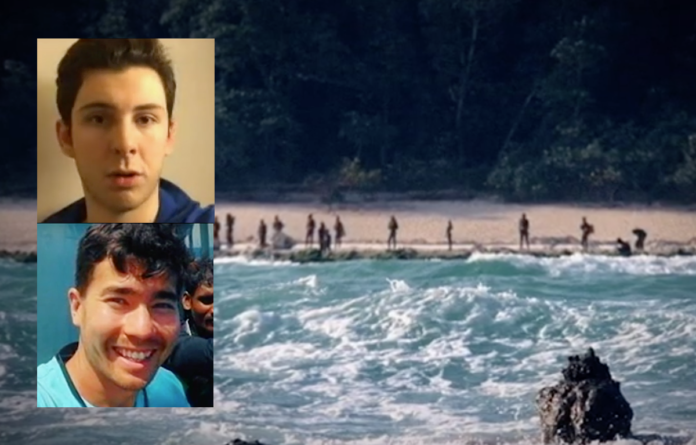 John Allen Chau, 26, an American tourist who fancied himself a missionary, barely escaped North Sentinel Island on November 15. It was his first encounter with the Sentinelese. He hoped to endear himself to the most isolated Stone Age tribe on Earth by bringing some gifts: fish, scissors, safety pins, and a football. He thought he would be accepted by the small group of between 60 to100 men, women and children. However, he didn’t speak their language. Nobody except the islanders knows what it even is. Chau violated Indian law to go there at all.

A teenage tribe member responded in kind by shooting an arrow at him, and he was saved when it pierced his waterproof Bible. He paddled frantically away in his canoe. You would think that would have been a sign, but instead, Chau went back to the island the next morning, reportedly shot with arrows, dragged along the beach, and buried in the sand.

Chua’s arrival at the island was a dream of his since High School.

Mat Staver, head of the anti-LGBTQ legal group, Liberty Counsel,explained why Chau was so set on going, even though he risked killing the entire tribe by exposing them to infections for which they had evolved no immunity. If he had done the least bit of research into the history of the tribe, he would have known he was putting the tribe at risk of contagion, as the tribe had experienced thanks to unwanted visitors in the past. Even a common cold could prove lethal.

“He wanted to go there because they were one of the most isolated people groups on the planet,” said Mat Staver. “And he wanted to share Jesus with them.”

Now Staver is demanding that authorities retrieve Chau’s body, but that doesn’t look likely. The locals realize that the tribe is unique in the world, like a living time capsule. They believe the tribe’s sovereignty must be respected. Dependra Pathak, the director of the police in the nearby Nicobar Islands to the local media:

“They are human treasure, and we respect that,” Dependra Pathak.

Now fellow missionary, John Middleton Ramsey, and Chau’s mother are clinging to their faith in the hope (or delusion?) that Chau remains alive. The authorities haven’t produced a body and the only witnesses were the local fishermen who illegally took Chau to the island in the first place.

Ramsey has his doubts, though the only account available suggests he was showered with arrows.

“I think there’s a possibility he may have survived — I wouldn’t rule it out,” the 22-year-old real estate agent toldThe Sunonline.”

Chau’s mother has a feeling.

“His mother is a Christian too and she has said that in her prayers that she had feelings that John might still be alive.”

“And there weren’t a whole lot of eyewitnesses and so since his body hasn’t been found we shouldn’t rule it out, even if it is a small chance.”

Indian police and coast guard watch the tribe with binoculars from a safe distance, hoping to get clues of where the young man’s body might be. But so far they don’t plan to intervene with the tribe. Instead, they arrested the fishermen. In 2006, the tribe killed two poachers who strayed too close to the island. Authorities left their bodies behind as well.

Why should the story be different for a young, idealistic, naive, and ill-advised man whose last words to the tribe were in English and were completely unrecognizable.

“My name is John. I love you and Jesus loves you.”

It’s important to note that Chau was not acting independently. He approached the island with a “cartoonish style of Western swagger,” and was encouraged by people like Mat Staver and a number of American evangelical missions groups. He had worked toward the goal since high school and through his days at Oral Roberts University. He had no worries that his visit might be a form of cultural imperialism that many Christians and even evangelicals recognize today as dangerous to cultures.

Was John Allen Chau a martyr or an “American dickhead?” Have Americans not learned enough from our own brutal past to conclude the latter? Chau chose to endanger one of the last remaining tribes on earth free from modern society. He lost his life for the chance to irrevocably change one of the last relatively untouched cultures. Now his final resting place continues to threaten that culture as his family and friends can’t let him go.