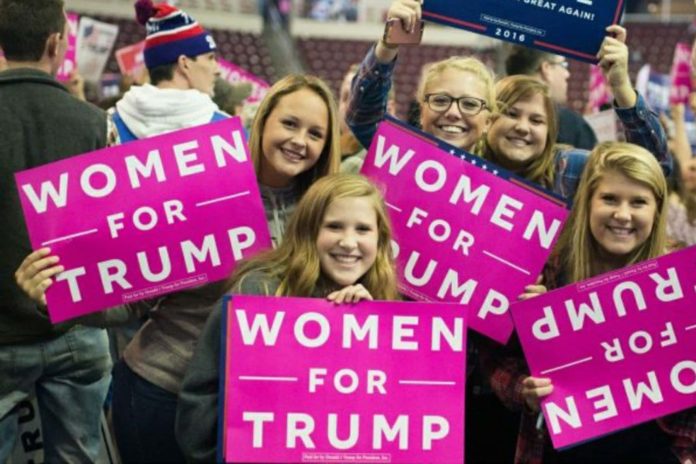 One of the reasons Donald Trump was elected president in 2020 is because women chose him over Democratic nominee Hillary Clinton, 53 to 47 percent. But now many of those same female Trump voters are saying his recent racist insults have convinced them they won’t be voting to reelect the president in next year’s election.

The Associated Press spoke with suburban women voters in the key battleground states of Colorado, Michigan Pennsylvania, and Wisconsin, and what they heard suggests that Trump is facing an uphill climb for a second term.

Take Carol Evans, who says she approves of the president’s immigration policies and believes he’s been good for the economy. Evans, who lives in the affluent Milwaukee suburbs of Waukesha County, now says she won’t commit to casting her ballot for Trump in 2020. The reason is simple, she adds:

“I just don’t like the way he talks about other people.”

In Novi, Michigan, a suburb of Detroit, pet store employee Emily West admits she didn’t vote in 2016 but probably would have chosen Trump if she had voted. And she is not impressed with what she sees from the incumbent:

“It was mainly when he got into office when my opinion started changing. Just the way he treats people.”

Kathy Barnes lives in Lone Tree, which leans conservative, and she too noted that the president makes her ashamed to be an American:

All of these woman are indicative of a larger trend taking place across the U.S. when it comes to female voters. And that trend does not bode well for Republicans, the AP notes:

The president’s recent return to racial politics may be aimed at rallying his base of white working-class voters across rural America. But the risks of the strategy are glaring in conversations with women like Evans.

Many professional, suburban women ” a critical voting bloc in the 2020 election ” recoil at the abrasive, divisive rhetoric, exposing the president to a potential wave of opposition in key battlegrounds across the country.

The 2018 midterms amounted to a strong showing of opposition among women in the suburbs, registering in unprecedented turnout overall, a Democratic House and a record number of women elected in statehouses across the country.

“I don’t think I should say those words in front of my daughter. All of the disrespect and lies and stuff like that, it’s just too much for me.”

If women turn out to be the key demographic again in 2020 — and all of the data suggests they will be — Donald Trump is in for a world of hurt when the votes are counted.