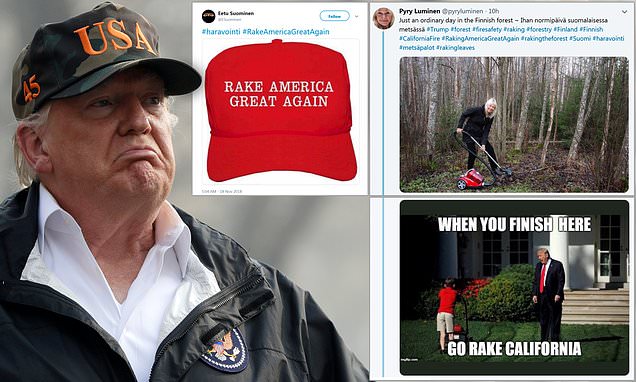 Over the weekend, President Donald Trump got a firsthand view of the horrific devastation caused by the wildfires raging in California. He also managed to make a complete fool of himself with comments he made while in the Golden State, referring to the town of Paradise as “Pleasure,” and claiming that in Finland they have almost no forest fires because Finns rake the ground in their forests:

“You look at other countries where they do it differently and it’s a whole different story. I was with the president of Finland and he said: ‘We have a much different — we’re a forest nation.’ He called it a forest nation, and they spent a lot of time on raking and cleaning and doing things. And they don’t have any problem.”

The President of Finland, Sauli Niinistö, said he’d never had any such conversation with Trump:

Meanwhile, the people of Finland wasted no time reminding Trump that he’s a complete fool and expertly trolling him on Twitter. Take a look:

Here I am just #raking around as all us #finns do to prevent forest fires. pic.twitter.com/lNFUiQoqmj

Just been out in the forest raking. It’s my civic duty. We’re all at it. So industrious. #Finland #RakeAmericaGreatAgain 🌲🇫🇮 pic.twitter.com/Z14T3THsBu

Stay woke people, don’t believe all the news about Finland. Some claim that the forests are raked, but just look at the state of this national park. It’s really difficult for people to find the mushrooms, because the state neglects the raking. #RakeNews #RakeAmericaGreatAgain pic.twitter.com/XMIXORmJ3j

To our Finnish friends and allies: We deeply apologize for the moronic remarks of our so-called president. We’ll do better next time. Maybe when he’s gone, we can all gather for a giant rake out and celebrate being united in raking. Until then, rake on!