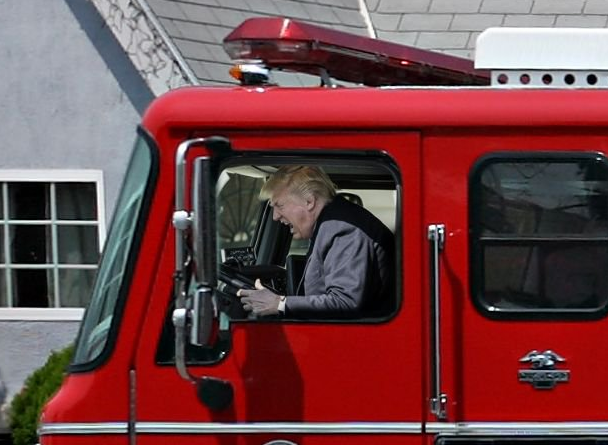 Remember when President Donald Trump threw a hissy fit because the International Association of Fire Fighters endorsed former Vice-President Joe Biden and Trump claimed members are leaving the union because of it? Well, that was all bullsh*t according to union chief Harold Schaitberger.

“On behalf of the International Association of Fire Fighters, I’m proud to announce that we stand with Joe Biden and endorse his candidacy for President of the United States,” Schaitberger announced in April.

“Joe’s a lot like our firefighters,” he continued. “He’s a problem solver who cares deeply about America and committed to making our country better. He’s one of the staunchest advocates for working families. He knows that a strong middle class means a strong America, and we know, as president, he will stand up for all the patriotic Americans who want nothing more than to earn a decent wage, send their kids to college, have affordable healthcare and a decent and secure retirement.”

At the beginning of May, Trump lashed out upon hearing of the endorsement by attacking the union, which has 316,000 members.

I’ve done more for Firefighters than this dues sucking union will ever do, and I get paid ZERO! https://t.co/Tw0qwTiUD6

He then proceeded to retweet 60 messages purportedly from “real” firefighters who support him in a tweetstorm that was widely mocked.

“I couldn’t be more proud to have the International Association of Fire Fighters on my team,” he wrote. “Unions built the middle class in this country — and as President, I’ll fight to strengthen them and grow the backbone of this country.”

Again, Trump and his cronies suggested that firefighters were abandoning the union over the endorsement, but that’s just not the case, which is the message Schaitberger sent to Trump on Thursday while talking the TheHillTV’s Krystal Ball.

“We have 316,000 members,” Schaitberger said. “We had 602… members who expressed their disagreement. 602. We have not lost any membership over this, which was suggested.”

Schaitberger went on to point out that firefighters come together. They don’t abandon each other, regardless of how much Trump clearly hoped they would.

You may recall @POTUS retweetstorm after Firefighters Union endorsed @JoeBiden. IAFF President Harold Schaitberger tells @krystalball and I today that only 602 out of of his 316,000 members pushed back on their endorsement of Biden and that zero have resigned membership pic.twitter.com/06jzl4X5ds

So, only 602 firefighters had a problem with endorsing Biden out of 316,000 ( about .02 percent). That’s a problem for Trump, who is lagging behind Biden by double-digits in a new Quinnipiac poll. Clearly, firefighters know a dumpster fire when they see one, and they are eager to snuff it out in 2020.