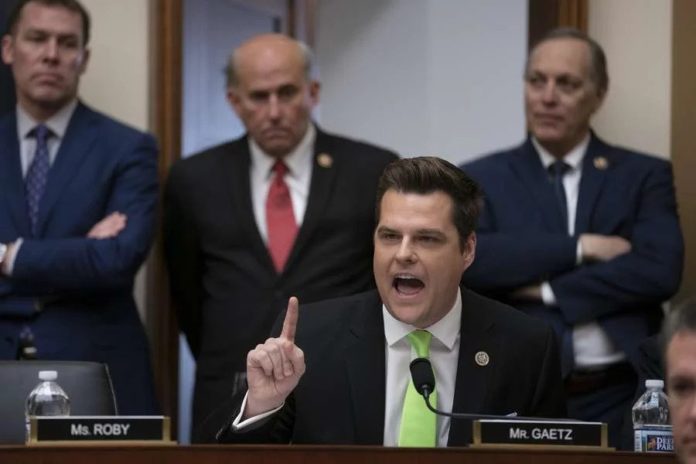 Rep. Matt Gaetz (R-FL), one of President Donald Trump’s most steadfast supporters in Congress, learned Wednesday that the Florida Bar has decided that a Tweet sent by him which threatened former Trump attorney Michael Cohen may warrant discipline and has been assigned to a grievance committee for review, according to ABC News.

“Do your wife & father-in-law know about your girlfriends? Maybe tonight would be a good time for that chat. I wonder if she’ll remain faithful when you’re in prison. She’s about to learn a lot…”

The Florida congressman later deleted the tweet, and when asked if had been intended as a threat against a witness in a case against the president, replied:

“Absolutely not. We’re witness testing not witness tampering. And when witnesses come before Congress their truthfulness and voracity ought to be tested and we have the opportunity.”

Facing a firestorm of controversy and a possible vote of censure by his colleagues in the House of Representatives, Gaetz later apologized for his tweet:

Speaker, I want to get the truth too. While it is important 2 create context around the testimony of liars like Michael Cohen, it was NOT my intent to threaten, as some believe I did. I’m deleting the tweet & I should have chosen words that better showed my intent. I’m sorry. https://t.co/Rdbw3sTQJD

But that apology hasn’t gotten Gaetz out of hot water in Florida, where he could be facing disbarment and losing his license to practice law.

Jillian Lane Wyant, a spokeswoman for Gaetz, told The Hill:

“Congressman Gaetz remains confident that the Florida Bar will not impair his vigorous and successful representation of his district.”

The Grievance Committee of the Florida Bar will now assign an investigator to Gaetz’s case and make a recommendation to the panel after conducting interviews and looking into evidence. That process could take up to six months.

Gaetz could also be facing penalties from the House Ethics Committee, ABC notes:

Rep. Kathleen Rice, (D-NY) wrote the ethics committee a letter explaining that she believed the tweet was in violation of 18 U.S. Code 1512, which defines witness tampering and intimidation. Rice encouraged the committee to refer the matter to the Justice Department after an investigation.