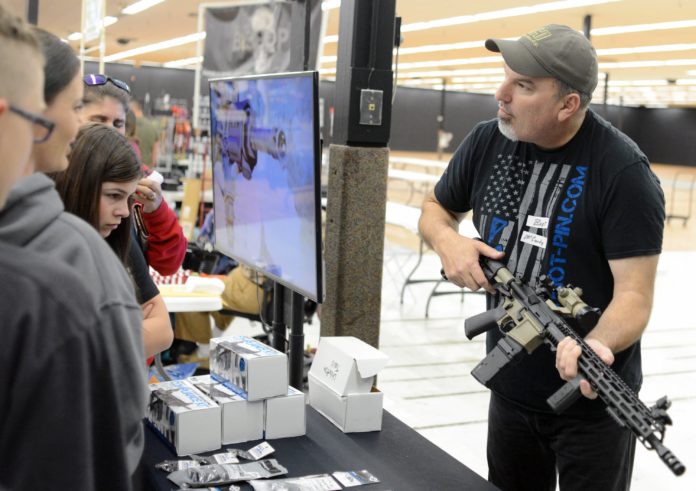 The Florida Republican Party is planning to hold a voter registration drive this weekend — just a week after the mass shootings in El Paso, Texas, and Dayton, Ohio, that left 31 people dead — at a gun show, according to The Tampa Bay Times:

“This is a great opportunity to engage the community and promote the values that make this country strong, prosperous, safe and great!” the email said.

The timing of the Pembroke Pines gun show has already drawn concerns from local residents, who have called the event insensitive to last weekend’s gun violence. City commissioners said they don’t want to host the gun show, but they already signed a contract to hold it at a city-owned venue, according to WFOR in Miami.

Pembroke Pines, by the way, is just a half hour away from Parkland, where a shooter killed 17 students and staff at Marjory Stoneman Douglas High School in February of last year.

Asked about the insensitive timing of the voter registration drive, Republican Party chairman Joe Gruters said the local GOP never considered canceling the event because “we can’t let a sick, deranged individual like that shooter impact the normal democratic process.”

“We’re going to target law abiding citizens and hopefully we’ll pick up some new registrations there. We’re not going to let unfortunate incidents that are incredibly sad and terrible effect our efforts.”

“It is more evidence that they are in the pocket of the NRA and completely out of touch with the American people.”

Based on current polling, 70 percent of Americans support a ban on assault weapons, and yet Republicans are trying to register voters at gun shows rather than showing respect to the families of those who lost loved ones when a white supremacist decided to prove his fealty to the disgusting proposition that immigrants aren’t welcome in the U.S.

It would be nice to believe that the GOP is interested in solving the problem of gun violence in this country. But their insensitive actions suggest they aren’t.