The United States Blues
Home News Florida spa madam and human trafficker sure has a lot of Republican... 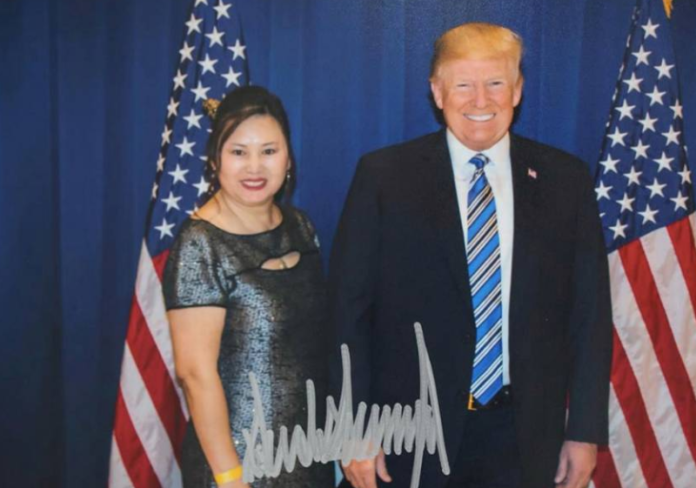 As the Florida spa sex trafficking scandal continues to unfold, it turns out the founder of the spa chain, Li Yang, has a lot of Republican friends. And there are pictures to prove it that they really don’t want people to see.

Li Yang founded the Asian day spa chain, but even before ownership changed hands law enforcement suspected her business of being involved in human trafficking, prostitution and sex slavery.

The story did not end there, but has only deepened with the revelation that Yang has appeared in photographs with many Republican politicians and conservative media personalities.

For instance, Yang has not only partied with Trump at Mar-a-Lago, she watched the Super Bowl with him and has several photos with him, including one that is signed by Trump himself. Oops.

Here, Li Yang (who goes by Cindy) poses with President Donald Trump at a fundraiser at Mar-a-Lago on March 2, 2018. pic.twitter.com/XmEPlupkLn

“The woman who snapped the blurry Super Bowl selfie with the president was Li Yang, 45, a self-made entrepreneur from China who started a chain of Asian day spas in South Florida.”https://t.co/0kTuxXF74u pic.twitter.com/aISoeUkk5q

Rep. Matt Gaetz (R-Fla), one of Trump’s top defenders and attack dogs who is accused of witness intimidation, posed with Yang for a photo at Trump National in Jupiter, Florida.

Not only is it @mattgaetz with Li Yang, founder of Orchids Day Spa…

it’s Li Yang with @mattgaetz at TRUMP NATIONAL @ JUPITER, where Orchids is located.

Matt, you seem a little flushed. Where’d you get that rosy glow? pic.twitter.com/ffeD2YK6Tk

Say it ain’t so. pic.twitter.com/VsAkoJ90s8

Perhaps his “doctorate” is in massage therapy? pic.twitter.com/u0ZPqdvoJe

Sarah Palin palled around with the human trafficker, too.

Sarah Palin can see Russia from her porch and a human trafficker from this picture with Li Yang. pic.twitter.com/7vdaqntdFs

Of note, Chao is the wife of Sen. Mitch McConnell. pic.twitter.com/RVT4A73nQW

Self-righteous Rep. Louie Gohmert (R-Texas) flashed his own smile with Yang in this photograph.

Why is Florida Governor Ron DeSantis posing with Li Yang?

Remember that time we had the opportunity to elect Andrew Gillum? pic.twitter.com/ElPByxnFUd

It looks like Trump has another tainted 2020 campaign manager since Brad Parscale also posed with Yang.

Hey, that sure does look like Li Yang with Brad Parscale, the 2020 campaign manger for President Trump.

It IS Brad Parscale. pic.twitter.com/naBeICXXpi

Fox News host Jeanine Pirro, who spent much of her legal career putting away sex offenders, posed for a picture with the alleged sex trafficker as well.

The Judge? No way.

And Fox News pundit Dan Bongino lost his sh*t on Twitter after GOP strategist Rick Wilson posted this photo of him with Yang.

This is so cute! I’ll bet this Dan Bongino story has a happy ending! https://t.co/TjphiYzdkX

Seriously, so many Republican lawmakers and conservative media figures have met and posed with Yang that this scandal really should be making national headlines. How does a human trafficker get so close to these people? Especially the president, who has spent a lot of time cheating on his wife and has been repeatedly accused of sexual assault. Just how far does his relationship with Yang go?

Perhaps House Democrats should subpoena Yang and compel her to testify. She might have a lot of dirty secrets to share.