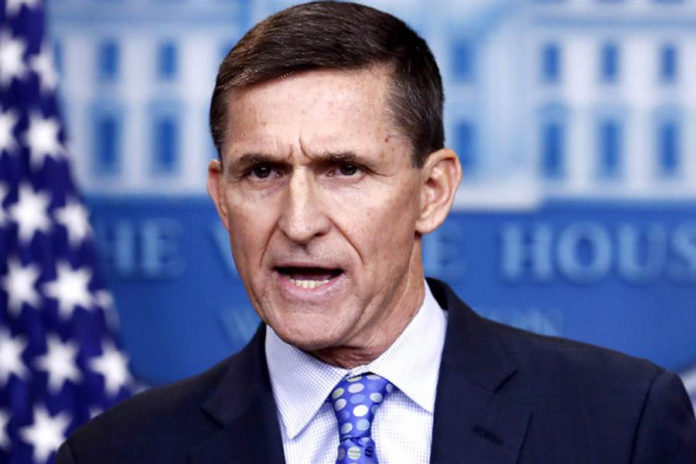 On top of that bombshell, it was announced that former Trump campaign foreign policy adviser George Papadopoulos pleaded guilty to charges involving lying to investigators about attempting to make contact with Russian officials. Papadopoulos is currently cooperating with investigators.

An article published by The Atlantic argues that Mike Flynn is likely next on the list. A Flynn indictment could be far worse for the Trump administration than those of Manafort and Gates.

Worth noting is that Flynn might have already been indicted. Papadopoulos’ guilty plea, for example, came on Oct. 5 and wasn’t announced until almost a month later. The former adviser was arrested months earlier. There is a genuine possibility that Mueller’s grand jury may have already handed down indictments that have yet to be unsealed.

Trump was able to distance himself from Manafort’s indictment because the charges did not officially lay out any “collusion” between the Trump campaign and Russia.

Flynn’s charges will likely be similar to Manafort’s.

Like Manafort, Flynn failed to register under the Foreign Agent Registration Act. He also may have lied to the FBI. During his record-breakingly short tenure as a national security adviser, Flynn reportedly told Vice President Mike Pence and others about conversations he held with then-Russian Ambassador Sergey Kislyak.

Flynn allegedly lied to the FBI about those conversations. He could also be in violation of a law that prevents private citizens from conducting foreign policy. Flynn’s work for Turkey is under scrutiny, including an alleged scheme to kick Fethullah Gulen (an enemy of Turkish President Recep Tayyip Erdogan) out of the country. Members of Congress have made a note of the trips Flynn made overseas, including one to celebrate the anniversary of the Russian state-owned propaganda network RT. Flynn did not disclose these trips as a former top general and failed to disclose them when he sought a new security clearance. He was also involved in a strange Middle-Eastern civil-nuclear power scheme.

Here’s why a Flynn indictment could be different. Such charges would bring Mueller straight into the White House. Mueller could call White House staffers in for questioning. The threat of testimony will create even more stress and distraction within an already fractured administration. And guess what? White House officials will need even more lawyers. That means more legal fees for an already strained staff.

Such an indictment would bring Mueller straight into the White House. Mueller could call White House staffers in for questioning. The threat of testimony will create even more stress and distraction within an already fractured administration. And guess what? White House officials will need even more lawyers. That means more legal fees for an already strained staff.

Trump kept Flynn in the administration despite the fact that he had lied to Pence. He also disregarded a conversation between then-Attorney General Sally Yates and White House Counsel Don McGahn.

After Flynn’s departure, Trump asked then-FBI Director James Comey if he could let Flynn go, claiming that he was a “good guy.”

Here’s what Comey testified in June:

“General Flynn at that point was in legal jeopardy. There was an open FBI criminal investigation of his statements in connection with the Russian contact, and the contacts themselves, and so that was my assessment at the time.”

Several months after that conversation, Trump fired Comey. No wonder Trump is in a panic – this scenario presents two separate occasions in which Trump may have obstructed justice. An indictment would make it much easier to build a case against Trump for attempting to block the investigation of Michael Flynn.

Oh, what a time to be alive.