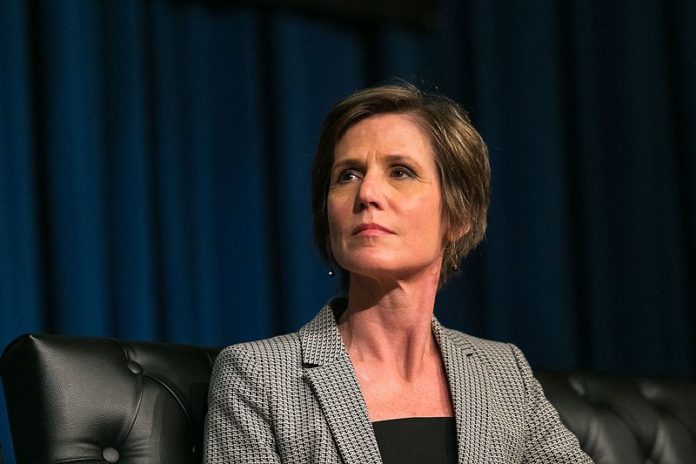 Yates became a national hero in Trump’s first year in office by refusing to carry out his unlawful order to bar Muslims from traveling to the United States from certain nations. She also warned him about former National Security Adviser Michael Flynn’s contacts with Russia, only to be ignored.

Trump would fire her soon after for standing up to him.

On Sunday, during an interview on Meet The Press, Yates told Andrea Mitchell that she has prosecuted people for obstruction on less evidence than what’s in the Mueller report, which lists at least ten instances of obstruction committed by Trump to sabotage the Russia investigation.

“I have been a prosecutor for nearly 30 years, and I can tell you that I’ve personally prosecuted obstruction cases on far, far less evidence than this,” Yates said. “And yes, I believe if he were not the president of the United States, he would likely be indicted on obstruction.”

Barr chose not to charge Trump for any of the obstruction crimes, which has drawn sharp criticism from legal experts and former federal prosecutors.

“Special Counsel Mueller did a very fair job in going through all 10 instances and laying out both the facts that established that he had committed the crime of obstruction, but also the defenses: both legal and factual,” Yates continued, going on to identify the three strongest cases which involve former White House Counsel Don McGahn, whom Trump ordered to fire Mueller but refused.

“But there are several incidents that he described to which Special Counsel Mueller really couldn’t point to any significant factual or legal defenses,” she said.

She agreed with Mitchell that Trump could be arrested and prosecuted after he leaves office but warned that Barr’s refusal to charge Trump causes a much bigger problem.

“The bigger issue is not just whether or not this establishes a crime,” she concluded. “But is this the kind of conduct that we should expect from the president of the United States?”

EXCLUSIVE: Former U.S. Dep Attorney Gen Sally Yates says, “I’ve personally prosecuted obstruction (of justice) cases on far, far less evidence than this”@SallyQYates: “If he were not the president of the united states, he would likely be indicted on obstruction” pic.twitter.com/h4EMNKe2dc

Barr had a responsibility to do his duty to the Constitution and the country. Instead, he failed by acting as Trump’s protector. Had Yates remained as Acting Attorney General, you can bet she would not have lowered herself to be one of Trump’s stooges. She would have pursued charges rather than let a criminal off the hook.