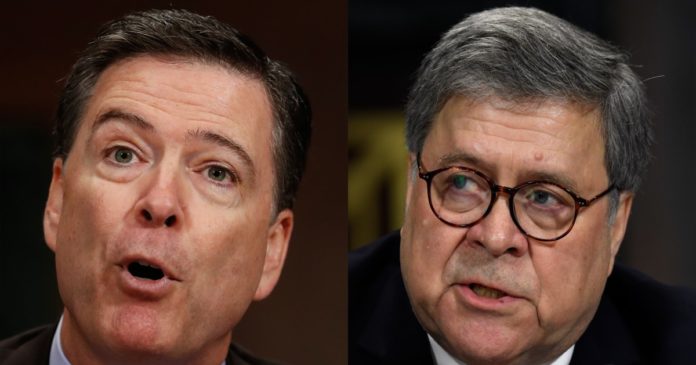 Former FBI Director James Comey has had quite enough of Attorney General William Barr’s repeated attacks on employees working for the Department of Justice, and he’s making it clear the AG needs to be a leader instead of a lap dog for President Donald Trump.

“The fact of the matter is Bob Mueller did not look at the government’s activities. He was looking at whether or not the Trump campaign had conspired with the Russians. But he was not going back and looking at the counterintelligence program. And we have a number of investigations underway that touch upon it — the main one being the office of inspector general that’s looking at the FISA warrants.”

Comey suggested that the attorney general either prove his assertions with facts or keep his mouth shut:

The AG should stop sliming his own Department. If there are bad facts, show us, or search for them professionally and then tell us what you found. An AG must act like the leader of the Department of Justice, an organization based on truth. Donald Trump has enough spokespeople.

This isn’t the first time Comey has gone after Barr. He also wrote a blistering op-ed for the New York Times in which he noted that Trump is an “amoral” leader who “eats your soul in small bites,” adding:

“Accomplished people lacking inner strength can’t resist the compromises necessary to survive Mr. Trump and that adds up to something they will never recover from.”

It’s time to put up or shut up.

Is anyone else tired of hearing from this guy?

The attorney general is supposed to the people’s attorney, not a defender of the president. And yet William Barr has proven time and time again that he only wants to be Trump’s personal lawyer and has zero interest in doing what’s in the best interest of the nation.