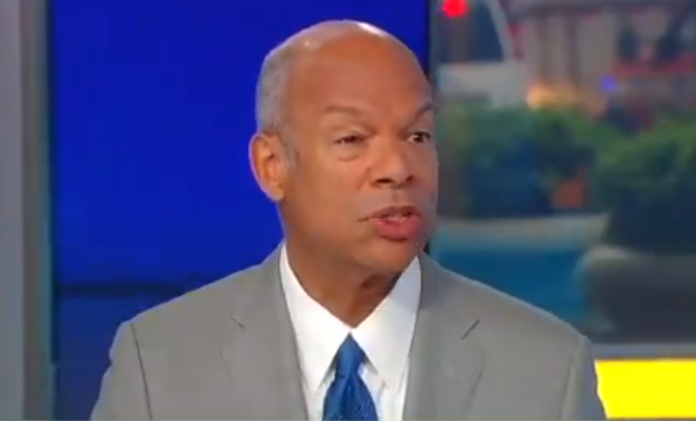 Former Secretary of Homeland Security under President Barack Obama, Jeh Johnson, made it clear to a Fox News host Thursday that words do indeed have consequence, and refused to give President Donald Trump a pass for his recent racist language telling four female members of Congress to “go back” to where they came from.

During an appearance on Fox, Johnson commented:

“Whether you’re the fourth-generation descendant of a slave from Lynchburg, Virginia, or your name is George W. Bush, or your name is Donald Trump, or you were naturalized… in Brooklyn at 9:30 yesterday morning, you’re an American, period. This is your home. There’s no place to go back to, and I hope we all remember that.”

That led Brian Kilmeade to respond:

“I think that’s very well said. I think his point was, when people are so critical of the country, it frustrates a lot of people in this country because they don’t seem to understand how great this country is.”

Johnson was having none of Kilmeade’s pathetic excuses, telling the host:

“Well, that’s the walk-back version. The original statement to four American citizens, three of whom were born here, is go back to where you came from. That was the original tweet. That represents a huge setback to the ability of our elected leaders in Washington to get things done for the people here.”

When the discussion turned to the subject of immigration, Johnson again said that Trump is to blame to the impasse with Congress on that and many other issues:

“The principal reason for that is President Trump’s own rhetoric. Every time I think there might be an opportunity for getting something done, he frankly pours gasoline over the whole relationship so that they don’t want to work with him.”

It’s always fun to watch as someone goes on Fox and shuts them down with facts and logic. The brainwashed propagandists at Trump TV always look like a deer caught in headlights when they get pelted with something other than pro-Trump talking points.