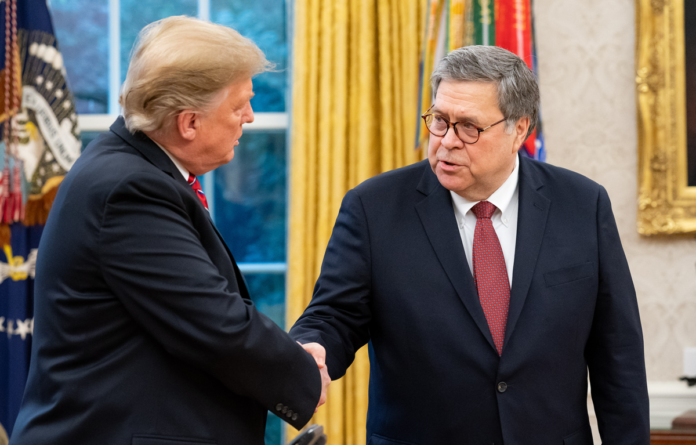 Let’s make something absolutely clear. The FBI did not “spy” on Trump’s 2016 campaign as he continuously claims. That claim has been repeatedly debunked, including by former Rep. Trey Gowdy (R-S.C.), who served as a member of the House Intelligence and Oversight Committees at the time.

The FBI had probable cause to investigate Trump’s campaign for possible Russian infiltration as pointed out by the Mueller report, but Trump refuses to let his conspiracy claim die because he is hoping to frame the intelligence community ahead of the 2020 Election.

In that effort, he has given Barr the power to declassify any documents from any intelligence agency he desires, especially if Trump can spin such documents to help his cause.

And Barr will do Trump’s bidding just like he did when he accused the intelligence community of spying on Trump’s campaign during congressional testimony.

This is a dangerous overreach of executive power that threatens intelligence assets and sources, and could even result in information being passed along to Russian dictator Vladimir Putin, who owns Trump.

The backlash from former intelligence community officials has been swift and decidedly against the witch hunt.

“There’s a reason why the CIA is so vigilant about guarding its sources,” a former CIA covert operative told Business Insider. “It’s because lives are on the line. The AG is either ignorant of that fact, or he doesn’t care. Either way, it’s horrifying.”

Some believe Barr and Trump are going to cause sources to refuse to work with us because we can’t protect their identities.

“Why would a source want to cooperate with us if we cannot protect his or her identity?” former FBI agent Frank Montoya Jr., told the publication. “Or, just as importantly, the information they share with us? It will endanger the lives of sources if their identities or that information becomes public.”

Former CIA and the National Security Agency attorney Robert Deitz called the witch hunt a “direct insult to the leadership of the intel community” that “puts the cart before the horse in a dangerous way.”

Deitz even opined that the witch hunt is rigged to give Trump his desired outcome regardless of the evidence.

“The President has an outcome in mind that he would like to see,” Deitz continued. “And since Barr was so accommodating over the Mueller report, asking him to conduct an investigation, and then giving him declassification authority, suggests that the inquiry has been pre-cooked.”

Montoya added that Trump could share the materials with our enemies.

Furthermore, other former intelligence officials chimed in on Twitter.

Attorney General Barr has no business knowing what assets CIA has in Russia. It’s absurd and inappropriate for him to even ask. Only in a world in which he’s empowered beyond his official capacity by the president would he have the audacity to pursue this information. pic.twitter.com/mEl8fPFTYv

Remember that Russia active measures against the United States are ONGOING. These sources, and the ability to recruit new ones, are essential to the IC being able to counter threat. It’s essentially collusion in plain sight to enable Russia’s efforts by thwarting our own IC 2/

I’ll add here that the ripple effects are going to go beyond Russia. Whatever you feel about the Russia investigation, this will effect our ability to get people to work with us against terrorists, Iran, China, and other adversaries and countries working against our interest. END

Barr’s malfeasance undermines our national security & his inexcusable actions will debilitate CIA’s ability to do their job. When sources disappear so will the vital intelligence they provide…intelligence that keeps our nation safe. This damage will be felt for decades to come. https://t.co/2u6tICGxXO

What should scare every American is the silence from the GOP, the deafening silence from the public servants we elected to keep our nation safe. Remember this silence in 2020. They are not patriots they’re partisan hacks who care more about their agenda then our national security https://t.co/OP7DvKG5pR

If this is a legitimate effort to learn about the trustworthiness of the intel. Easy, There are established processes. If it is an effort to find scapegoats to help with partisan deflection (like Trump did with FBI), then leadership needs to fall on its sword and refuse to play. https://t.co/IwYX7jxauK

Clearly, Trump is putting our national security at risk in a desperate ploy to delegitimize the Russia investigation and the damning Mueller report that details his crimes. Trump is hoping to frame the intelligence community and he does not care how much it harms our country as long as he protects himself. This is impeachable misconduct and it’s time for Republicans to step up and oust this lunatic before it’s too late.