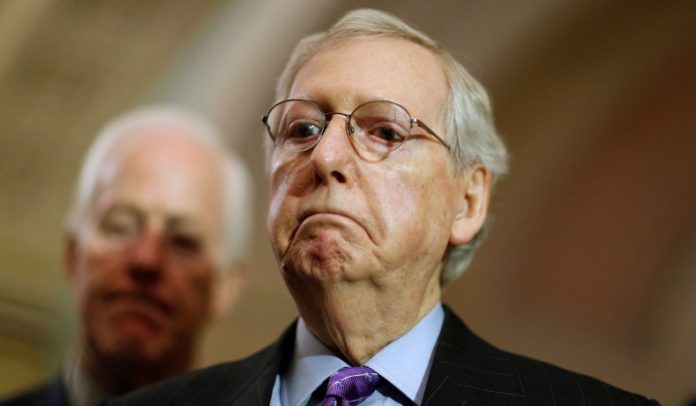 While many of the Democratic candidates for the 2020 presidential nomination attacked President Donald Trump during Wednesday night’s debate in Detroit, there was no mention of Senate Majority Leader Mitch McConnell (R-KY), who may well be a bigger threat than Trump, according to former Detroit mayor Dennis Archer.

Appearing on CNN Thursday morning for a discussion of the Democratic debate, Archer noted that McConnell needs to be the focus of attention for those seeking to be the next president:

“I was surprised last night that a number of the candidates on that stage did not bother to say what Senate Majority Leader McConnell has suppressed coming out of the United States Senate. You’re talking about, for example, infrastructure. Our newly elected governor [Democrat Gretchen Whitmer] is outstanding, she’s doing a great job — fix the damn roads was her message.”

Archer then noted that it’s McConnell who continues to block legislation such as bills to protect our elections from foreign interference:

“All across the United States, if there was not a meeting before the inauguration of President Obama where Mitch McConnell made it clear Obama would be a one-term president, you think about all the programs that could have been implemented? But he stopped them. Right now he’s got a number of issues before him in the United States Senate and they blocked them!”

The solution, Archer concluded, is to defeat Trump and also make sure McConnell is voted out of office in 2020:

“What that says to me, if we want help, if we want change, we got to make change across the board. We want somebody who’s got the wisdom, the knowledge, and experience to make sure that happens. and we also have to relieve Mr. McConnell of his job.”

Keep in mind that McConnell also continues to fast track Trump’s nominees to the federal bench, meaning that right-wing judges are being added to the courts on a daily basis. Many of them are so extreme that they’ll gladly trample on the rights of the most vulnerable Americans in an attempt to make sure the power of the president is unchallenged.

Donald Trump and Mitch McConnell need to be sent into retirement next year. Then we can begin to rebuild this country and reverse the destructive policies of the Republicans.