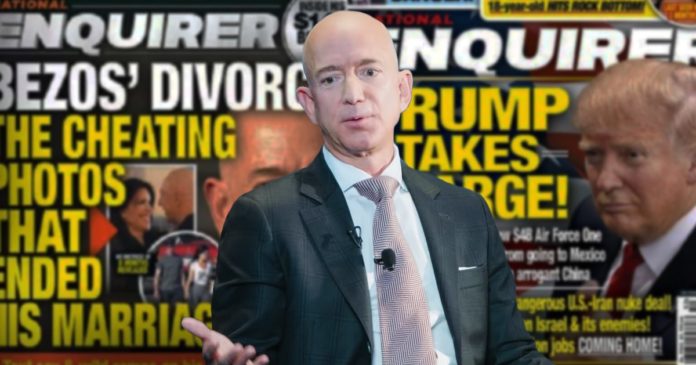 While most of us were rightly shocked to learn that the National Enquirer and its parent company, American Media Inc. (AMI) had attempted to blackmail the richest man in the world, Amazon CEO Jeff Bezos, those who have worked for the publication say its been doing such underhanded (and possibly illegal) things for years.

The Daily Beast reports that three former employees have revealed the Bezos revelations are par for the course when it comes to the Enquirer. As one noted, “The threats, the blackmail, that’s their business model.”

Paul Barresi, who worked as a private investigator for the National Enquirer and other tabloids for several years, said he wasn’t the least bit surprised when Bezos exposed how AMI was trying to silence him:

“The National Enquirer had some people who would go to a celebrity and say, ‘unless you give in to a one-on-one interview that would amount to a fluff piece with us, we’re going to report XYZ.’ The celebrity would then acquiesce to their demand.”

“The nice way of calling it was quid pro quo, but really it was blackmail. I know that the same methodology is practiced today. Obviously it’s practiced, because they did it (to Bezos.)”

Daniel “Danno” Hanks, worked as an contracted investigator for the Enquirer for 40 years. He calls their tactics the “war of blackmail.”:

“I’ve known this newspaper’s tactics for years, and I’d rather the truth be told.

“The Enquirer had a list of which attorneys worked for which celebrities, and if someone approached [the tabloid] for a story, they would approach the attorneys and say, ‘Make us a better offer.'”

The Enquirer also engages in what’s known in the trade as “catch and kill” operations, meaning the tabloid pays for an exclusive interview and then refuses to publish it as a favor to an ally or to use the dirt as a way to get a celebrity to cooperate with them:

“The National Enquirer offered to pay for an interview with one of Bill Cosby’s accusers in 2005, then allegedly turned over the file to the comedian in exchange for an exclusive sit-down with him. The Los Angeles Times has reported that in 2003, the Enquirer paid a woman $20,000 for an exclusive about an alleged affair with Arnold Schwarzenegger, then never ran it and made Schwarzenegger a consultant for AMI magazines.

“The Wall Street Journal reported in 2009 that two years earlier, AMI obtained photographs that showed golf star Tiger Woods having an affair. They didn’t run a story in the National Enquirer; instead, they cut a deal with Woods to appear on the cover of Men’s Fitness, an AMI title.”

In the past, most celebrities were unwilling to fight the Enquirer and AMI, but things have changed, Hanks noted:

“It used to be that a celebrity or any kind of famous businessman like Bezos would cringe at the thought of something ending up in the Enquirer. But as time goes on by, they realize that people are more angry at the Enquirer than they are at them, for exposing someone’s dirty laundry. And I think Jeff Bezos is just the kind of guy who said, ‘I’ve had it. I’m not going to let myself be a victim’… and decided to fight back.

“‘This guy has got some balls,’ Barresi said of Bezos, ‘because he’s standing up to them.'”