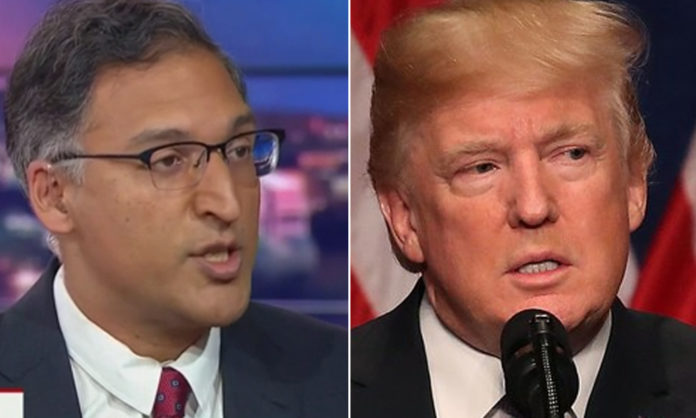 Neal Katyal is the former acting solicitor general for the Obama administration and one of the most respected legal experts in the country. And he says House Democrats already have overwhelming evidence to draw up an article of impeachment against President Donald Trump on the charge of bribery.

In his new book Impeach: The Case Against Donald Trump, an excerpt of which has been published in Newsweek, Katyal explains the reason impeachment was included in the U.S. constitution, and that bribery is specifically mentioned as a reason to impeach a president. The case against Trump when it comes to bribery, Katyal notes, is overwhelming:

“Section 201(b)(2) of the criminal code says it is a crime if a public official ‘directly or indirectly, corruptly demands, seeks, receives, accepts, or agrees to receive or accept anything of value personally or for any other person or entity, in return for…an official act.’ That fits President Donald Trump’s conduct with Ukraine to a T, which is why Speaker Nancy Pelosi referenced bribery specifically.”

Katyal goes on to add that the case against Trump when it comes to bribery is so clear-cut and overwhelming that it’s not even necessary for Democrats to prove the president was withholding military aid to Ukraine unless the government there would agree to investigate former Vice President Joe Biden or his son, Hunter:

“The problem arises when the president asks a foreign power for a personal favor — one that doesn’t align with the interests of those he represents. When a president abdicates his duty in front of another country, he leaves himself, and our nation, vulnerable to blackmail.”

Despite these facts, Trump seems to believe that he should be allowed to walk free and his impeachment canceled, writing on Twitter Monday morning:

Support for Impeachment is dropping like a rock, down into the 20’s in some Polls. Dems should now get down to work and finally approve USMCA, and much more!

As is usually the case, however, Trump provided no link to any polls that support his specious claim. Instead, his tweet only serves to prove just how terrified he is.