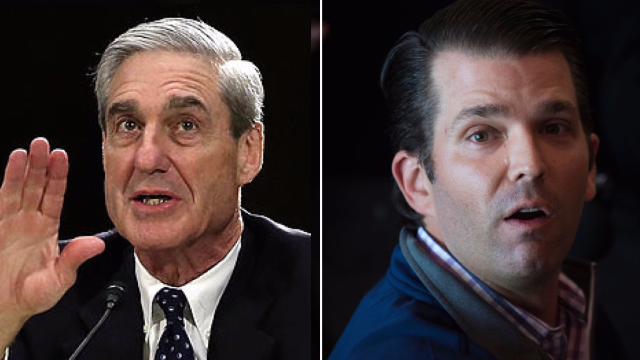 A former federal prosecutor with the Southern District of New York is warning that Special Counsel Robert Mueller may be on the verge of indicting the president’s son, Donald Trump Jr.

Appearing on MSNBC, Daniel Goldman said news that President Trump has now submitted written answers to questions from the special counsel means Mueller can now proceed with his next moves in the Russia probe and doesn’t need anything else from Trump:

“They don’t need his answers. So if he doesn’t want to answer the questions and defend himself on an obstruction justice case, then he doesn’t have to.”

Mueller’s silence, Goldman went on to explain, is also very bad news for Donald Trump Jr., who has yet to speak with the Mueller team:

“Anyone who is the subject of an investigation should worry if prosecutors don’t want to talk to them, because that means that they are circling around you. That’s pretty well accepted.”

All of this suggests that Mueller is getting closer to unsealing indictments with the names of Stone, Assange, and Don Jr. on them. When that happens, what will President Trump try to do to protect his son? He can give him a full pardon, but that would only protect Junior from federal charges. We know the New York Attorney General is also looking into filing charges against members of the 2016 Trump campaign, including Don Jr., who met with Russians at Trump Tower to obtain “dirt” on Hillary Clinton.

Robert Mueller is about to start squeezing those who have the most to lose, including the president’s son. When he does, it could be lights out for Don Jr. and his father.