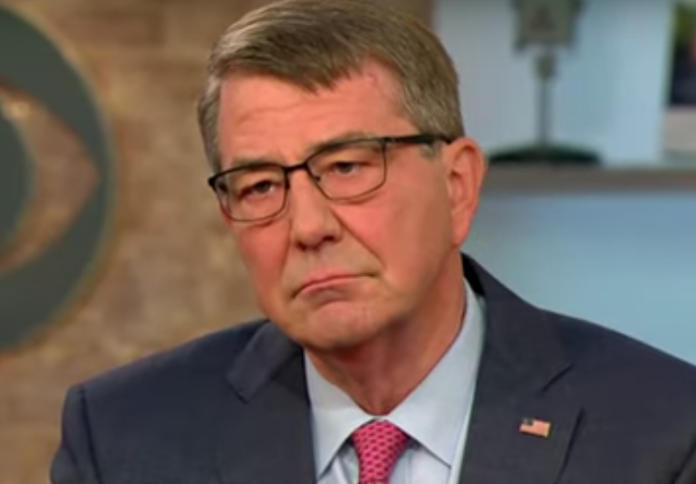 Former Secretary of Defense Ash Carter has a new book out in which he explains that he would never have agreed to join President Donald Trump’s administration and pointed out that he fired military officers who acted like the toddler-in-chief.

Carter, who has spent decades in the Pentagon working under Republican and Democratic administrations, most recently under former President Barack Obama, appeared on CBS on Monday to discuss his book, Inside the Five-Sided Box.

Of particular focus were his remarks about Trump and his racist behavior, which Carter explained would not be tolerated in the United States military, at least not when he served as Pentagon chief.

“It’s not politics, it’s personal conduct,” Carter said. “In my book I’m talking about the way that public servants, in all the years — I worked for presidents in both parties and the Pentagon for over 37 years, and I used to tell officers and soldiers that they needed to behave themselves, that part of the profession of arms is honor and trust.”

Trump is a liar and five-time draft dodger who doesn’t know the meaning of the word “honor”.

“And it’s not just the president,” he continued. “It’s the kind of behavior and personal conduct that you see everywhere in Washington is not the kind of thing, as the book says, that is tolerated in the military. I fired people for doing that, and my subordinates fired people for even less. So we held to high standards, and I think that’s important.”

Carter then slammed Trump for failing to listen to the advice of his Cabinet members and said that he wouldn’t know how to help Trump, which is why he would lean toward declining if he were asked to work for him.

“On the question of whether to work for Trump or not, that’s just purely hypothetical,” he concluded. “I haven’t been [asked]. The point I was making in the book was, I was giving advice to future officeholders. Your first duty as a Cabinet secretary is to serve the president. To help him. I wouldn’t know how to help him, because he doesn’t seem to take the advice.”

Former Pres. Obama’s Defense Secretary Ash Carter is offering a new inside look at the Pentagon, one of the world’s largest and most complex organizations.

Carter tells the story of the Pentagon & how it deals with security threats in his new book “Inside the Five-Sided Box.” pic.twitter.com/qwN1qbDASz

Trump’s behavior is only getting worse, and it’s going to start infecting the military if it hasn’t already. After all, Trump is pardoning ex-soldiers who were convicted of committing war crimes, sending a message to our troops that they can ignore the Geneva Convention and giving enemy troops license to do the same. He’s also repeatedly used the military as a prop and has made multiple attempts to politicize it.

As president, Trump should be setting an example. Instead, he’s turning America into a monster.