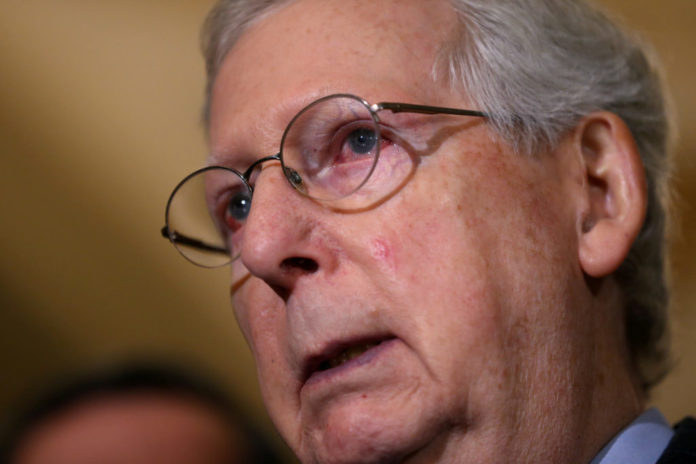 The government shutdown — which is now in its 29th day — could have potentially ended weeks ago if Senate Majority Leader Mitch McConnell (R-KY) had simply allowed spending bills to come to the floor for a vote. Instead, he has refused, reportedly because he doesn’t want to embarrass President Donald Trump.

Barbara Boxer, a former Democratic senator from California said Friday on MSNBC that McConnell is just as to blame for the fact that nearly a million federal workers are having to rely on food banks in order to provide for their families since they haven’t been paid in weeks:

“The two people who are responsible? Donald Trump, because he could not successfully come through with his campaign promise that Mexico would pay for the wall. He agreed to put that aside, Rush Limbaugh told him no, so he got into this jam.

“Then you have Mitch McConnell. I served him for many years, he’s tough and strong. All of sudden he’s this little complicit coward and saying ‘I’m not doing anything until the president tells me what he wants?'”

Boxer also noted that McConnell’s steadfast refusal to bring a continuing resolution to the floor of the Senate is an unconstitutional abdication of the Senate’s authority. She then added:

“All these diversions of turning this into a ‘Pelosi-Trump battle’, that’s a diversion. Turning it into ‘let’s look at North Korea’, another meeting with another tyrant, so what? Open up the government. Open it up.”

This time next Friday, members of the Coast Guard, Secret Service, FBI, and other agencies that protect us from terrorist attacks and other forms of crime and mayhem will miss their second paycheck. And yet they will be expected to continue doing their jobs as if nothing has changed. But to expect anyone to work without pay is asking them to be an indentured servant and smile despite their plight. That is unacceptable in the richest country in the world.

To hell with the wall. Open the damn government, Trump!