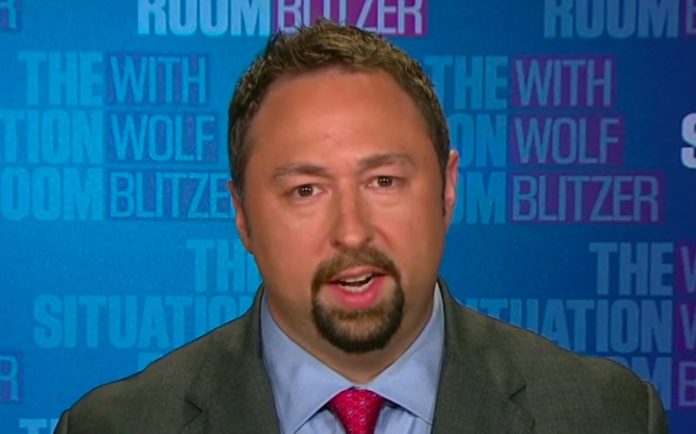 You’ve probably seen former Trump campaign spokesman Jason Miller on cable news, relentlessly defending President Donald Trump no matter what he says or does. But on Thursday night, he completely jumped the shark with an obscenity-filled attack on Rep. Jerry Nadler (D-NY), chairman of the House Judiciary Committee.

And when he had completed his disgusting tweets aimed at Congressman Nadler, Miller turned coward and ran, deleting his Twitter account.

And then came the cut and run:

Looks like his LinkedIn and Teneo page are no longer active either. https://t.co/CYXqH9m47fhttps://t.co/qFlJj5iCkI

Typical Trumpkin: He attacks others but doesn’t have the courage of his convictions, so he hides when he knows he’s just made a gigantic mistake.

Reaction on Twitter to Miller’s online sniping and cowardice was swift:

Alas, poor Jason Miller, we hardly knew ye, but what we did know showed thou art a most notable coward, an infinite and endless liar, the owner of not one good quality.

I think my favorite thing is that a comms director thinks that people don’t know how to screenshot.

Jason Miller is what happens when Eric Cartman comes to life as middle-aged bottom feeder. pic.twitter.com/F891R69Od9

Jason Miller is a Managing Director at Teneo, a global CEO advisory firm. Jason’s boss at Teneo, Declan Kelly, must be so proud of how Jason is protecting the reputation of the company. @TeneoIreland pic.twitter.com/4BsMrDQ1PJ

In his next incarnation, Jason Miller will probably return as a GOP candidate for the Senate and earn the full support and endorsement of fellow Twitter bully Donald Trump.