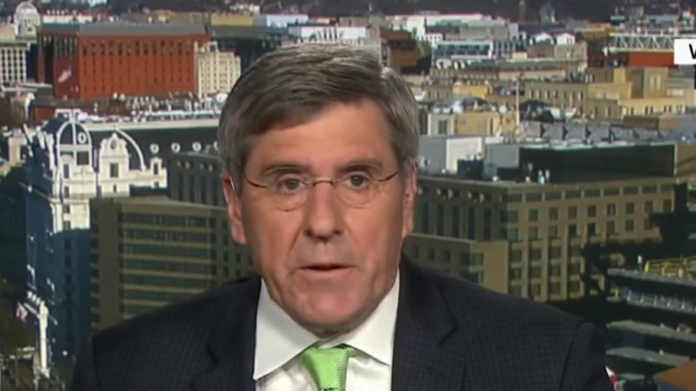 A former top economic adviser to the Trump campaign is warning that should the president decide to impose hefty tariffs on steel and aluminum imports, he may set off an international trade war and wreck the American economy.

Stephen Moore, who has vocally supported Trump’s tax cuts and other economic policies, said on CNN Monday morning that the tariffs being suggested by the president could spark a much wider economic conflict:

“We’re at a very dangerous moment right now. I do think it would be a big mistake if the Europeans and Canada and China retaliate because, knowing Donald Trump as we all do, this is a guy who doesn’t back down and he’s a counter-puncher. If they start imposing higher tariffs then you’ll get an escalation and that’s how trade wars do start.”

Even though Trump has said the tariffs are meant to punish China, they would have a larger impact on American allies such as Canada and the European Union. China barely makes the list of Top 10 steel exporters to the United States. Canada, Brazil, and South Korea are the three largest exporters.

Moore also addressed the issue of Trump unilaterally sticking tariffs on products from American allies, saying it was a bad idea:

“This is the first act — I hope cooler heads prevail and that Donald Trump will maybe just impose these steel tariffs on China. There’s no reason we need to have steel tariffs on Mexico and Canada if it’s a national security issue. Is anybody worried about Canada invading the United States.”

Members of the president’s own party have also said that tariffs are counterproductive. Congressman Mark Meadows sent out this tweet last week:

The Commerce Department’s recommendation to impose tariffs ignores history–and it ignores the reality that U.S. manufacturing will ultimately be the loser with these protectionist policies

“Kooky 18th century protectionism will jack up prices on American families — and will prompt retaliation from other countries … if the President goes through with this, it will kill American jobs — that’s what every trade war ultimately does. So much losing.”