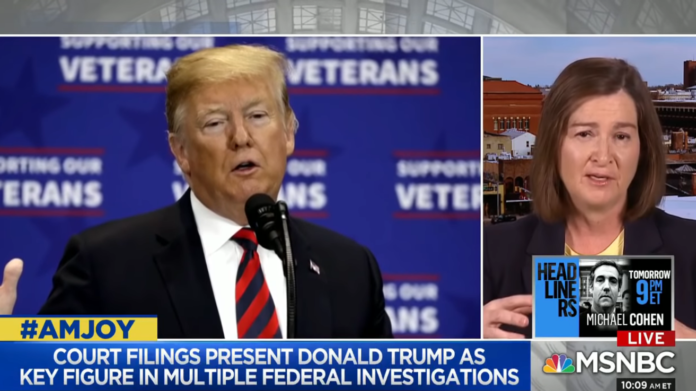 Now that President Donald Trump has been named as an unindicted co-conspirator in a scheme to pay hush money to women he had affairs with — which constitutes election fraud — a former U.S. Attorney says the time has come to boot the incumbent president from office.

Appearing on “AM Joy” Saturday morning, two former U.S. Attorneys, Joyce Vance of Alabama and Barbara McQuade of Michigan, both commented on the sentencing memos filed in court Friday by Special Counsel Robert Mueller and prosecutors with the Southern District of New York, with Vance noting:

“I think one of the most important takeaways here actually is an extra-legal takeaway. It’s the notion — that as American citizens — a candidate lied to us during the campaign.

“That has legal implications for the Mueller investigation, but the bottom line here is that all the time that Trump during the campaign was telling us he had no dealings in Russia, no business in Russia, he was actually sitting on top of a deal that was designed to bring in hundreds of millions of dollars according to filings that we’ve seen this week.”

McQuade concurred with Vance’s assessment, but then added she believes Trump is in office illegally and therefore has to be removed from the Oval Office:

“This is not just a regulatory offense when you talk about campaign finance violations. It could be that President Trump procured the presidency by fraud.

“Democracy is all about giving full information to voters so they can cast a ballot for the candidate of their choice. And by lying and covering up about his past on the eve of the election and violating the laws designed to create transparency, they say that President Trump clouded the process for the American voters.”

The former Michigan U.S. Attorney also made an analogy that’s sure to enrage Trump when he hears it:

Evidence seems to be mounting that Donald Trump is a completely illegitimate president. He may have obtained his office with fraud and possibly as part of a much larger conspiracy with Russia. If true, and if we allow him to remain in the Oval Office for a day longer, we will be endangering the very foundations of this republic.