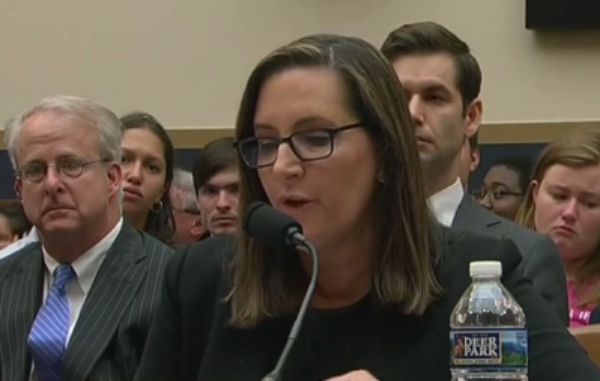 Former federal prosecutor Joyce Vance delivered devastating testimony in front of the House Judiciary Committee on Monday in which she said she would be willing to indict President Donald Trump on obstruction charges herself because the evidence is that damning.

The Mueller report lists ten instances of obstruction that Vance covered in her opening statement, including Trump ordering former White House counsel Don McGahn to fire Special Counsel Robert Mueller and demanding former Attorney General Jeff Sessions to unrecuse himself and kill the probe. Time and time again, Trump sought to undermine a legitimate federal investigation into Russia’s attack on our democratic process during the 2016 Election.

Last month, Vance joined over 1,000 former US Attorneys and Department of Justice officials in signing a statement saying that Trump would have been indicted and prosecuted had he not been president.

She pointed out that there are three elements prosecutors need to prove to make an obstruction case against someone: obstructive act, nexus with an official proceeding and corrupt intent.

Mueller and his team found all of these elements. They just could not indict because of a DOJ memo that says the president can’t be indicted.

Vance said that if she or any of the lawmakers on the committee had committed obstruction like Trump, they would have “been charged by now.”

And she is so confident that Trump committed obstruction that she is willing to prosecute him herself.

“If I was assessing that evidence as to a person other than a sitting president, the facts contained in that report would be sufficient to prove all of the elements necessary to charge multiple counts of obstruction of the evidence,” she said. “And I would be willing to personally indict the case, and to try the case. I would have confidence that the evidence would be sufficient to obtain a guilty verdict, and to win on appeal.”

“If anyone other than a president of the United States committed this conduct he would be under incitement today for multiple acts of obstruction of justice,” she concluded.

C-SPAN has @JoyceWhiteVance‘s complete opening statement: “If anyone other than a president of the United States committed this conduct he would be under incitement today for multiple acts of Obstruction of Justice.” pic.twitter.com/eZUIyl69t0

Vance is a former US Attorney who worked in the Northern District of Alabama. She is also a law professor so her words certainly carry weight. Its time for Republicans to join their colleague Rep. Justin Amash (R-Mich.) and support impeachment.