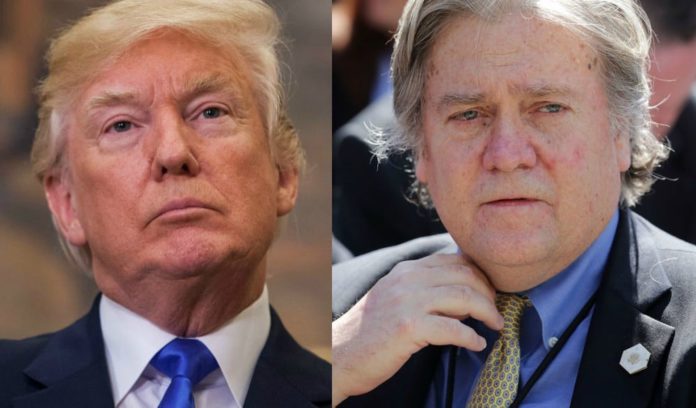 According to Steve Bannon, who served as White House Chief Strategist for seven months at the beginning of the Trump administration, his former boss is in control of a business — the Trump Organization — that is actually just a “criminal enterprise.”

The Guardian received an advance copy of author Michael Wolff’s explosive new book, Siege: Trump Under Fire, which will be published June 4, and in it, Bannon trashes his former boss several times.

Specifically, Bannon notes that the ongoing investigations into Trump’s finances and business interests presents an existential threat to the president:

In a key passage, Bannon is reported as saying he believes investigations of Donald Trump’s financial history will provide proof of the underlying criminality of his company.

Assessing the president’s exposure to various investigations, many seeded by the special counsel Robert Mueller during his investigation of Russian election interference, Wolff writes: “Trump was vulnerable because for 40 years he had run what increasingly seemed to resemble a semi-criminal enterprise.”

He then quotes Bannon as saying: “I think we can drop the ‘semi’ part.”

Bannon also told Wolff that when Trump’s supporters see the president’s tax returns, they’ll know he’s been conning them from the moment he announced his candidacy:

In Siege, Wolff quotes Bannon saying investigations into Trump’s finances will cut adrift even his most ardent supporters: “This is where it isn’t a witch hunt – even for the hard core, this is where he turns into just a crooked business guy, and one worth $50m instead of $10bn.

“Not the billionaire he said he was, just another scumbag.”

Worst of all for Trump, his financial records may wind up being released in the middle of the 2020 campaign, as he seeks re-election with low approval ratings and a strong field of Democratic challengers led by former Vice President Joe Biden.

If indeed it can be proven that Trump is running a business that is corrupt and involved in criminal behavior, the president and his three eldest children — Don Jr., Ivanka, and Eric — could all be facing criminal liability for their actions.