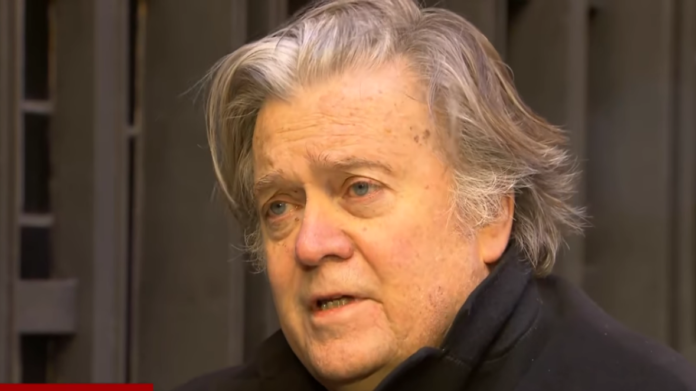 Former White House political adviser Steve Bannon says he’s convinced President Donald Trump will be re-elected in 2020 by a bigger margin than he did in 2016.

What Bannon neglected to mention is that Trump actually lost the 2016 popular vote by nearly 3 million votes to Hillary Clinton. Trump only managed to pull off a narrow victory in the electoral vote by an 80,000 vote margin over three key states: Michigan, Ohio, and Wisconsin. He also won with the considerable assistance of Russian hackers, WikiLeaks, and interference directed by the Kremlin.

Bannon went on to predict that 2019 would be a difficult year for the incumbent president:

“I believe that we’re going to enter into an extraordinary time in American politics.

“We’ve allowed the Democrats, because they take control of the House, to weaponize a whole bunch of investigations. They’ve been- They’re going to be able to weaponize the Mueller report, 2019’s going to be quite vitriolic.”

Another cloud hanging over Trump’s re-election is the upcoming report from Special Counsel Robert Mueller and a possible indictment from prosecutors with the U.S. Attorney’s office in the Southern District of New York. Either of those could wound Trump so badly that he becomes a political liability for the Republican party. In such a case, Trump might well face numerous primary opponents and wind up losing the general election even if he manages to win the GOP nomination.

Trump’s re-election is far from being a fait accompli. In six months, he might well become the first president to ever be impeached and removed from office. Time will tell.