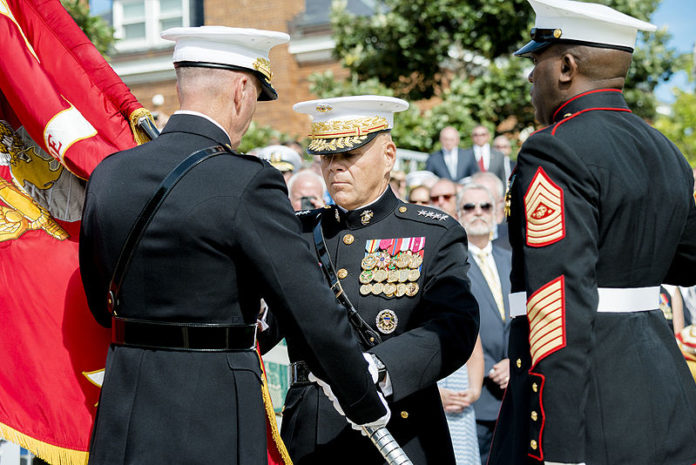 President Donald Trump’s decision to send our troops to the southern border for purely political reasons to hype up his fake national emergency is having a negative effort on the Marine Corps’ combat readiness, which is why four-star Marine General Robert Neller has sent a warning to the Acting Secretary of Defense.

Trump gave the order for troops to deploy to the border just prior to the November 2018 midterm election in a stunt hoping to scare the American people into thinking there’s a border crisis.

Even as we speak, Trump still has our troops deployed to a place they do not need to be, and that is depriving them of the necessary training and combat readiness to defend our nation should a real crisis arise.

In a memo, Neller wrote that sending and keeping troops on the border is “imposing unacceptable risk to Marine Corps combat readiness and solvency.”

For one thing, Marines are unable to properly prepare North Carolina for the next hurricane season as the state continues to recover from Hurricane Florence.

“We are in a challenging situation where we are not receiving the fiscal support necessary to address the critical situation in North Carolina as hurricane season approaches, compounded with an inability to move money around to address emergent, year-of-execution, “must pay bills” primarily generated outside of the Marine Corps,” he wrote.

“The overall impacts of these cancellations and expected cancellations will result in three extremely negative impacts to the joint force,” Neller continued, referring to several training and alliance-building exercises.

“Cancelled training and exercises in Twentynine Palms, Alaska, Scotland, or any other local training area will degrade the combat readiness and effectiveness of the Marine Corps,” he warned. “Marines rely on the hard, realistic training provided by these events to develop the individual and collective skills necessary to prepare for high-end combat. Although some effects can be mitigated, the experience lost by these units at a critical time in their preparation cannot be recouped.”

That means wasted taxpayers dollars and a less effective military

“Marines will not participate in exercises in Indonesia, Scotland, and Mongolia, and will reduce participation in exercises with Australia and the Republic of Korea at a time where we are attempting to double down on strengthening alliances and attracting new partners,” he concluded.

Instead, Trump is only weakening our alliances, particularly in South Korea as North Korean dictator Kim Jong Un continues to be a threat.

So, Trump is not only hurting the military’s domestic ability to secure the homefront, he is hurting their ability to be combat ready, which could come back to bite us later on if our enemies become more aggressive.

In short, Trump is the real national emergency, not the border.