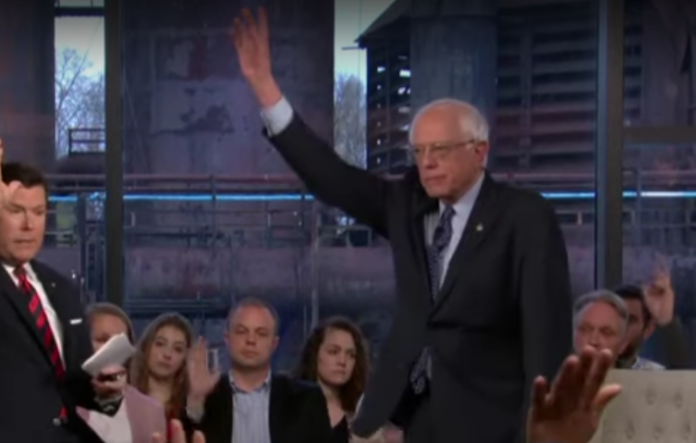 Sanders made the decision to appear on Fox News despite the DNC boycott against the network for being President Donald Trump’s state propaganda outlet.

Sanders, however, is hoping to reach Trump supporters and win them over to his way of thinking, which includes universal healthcare, which 70 percent of Americans back in the polls.

During the town hall on Monday evening, Sanders passionately defended enacting a universal healthcare system in the United States, which would replace the private insurance industry and make healthcare more affordable and more accessible.

Basically, America’s healthcare system would resemble healthcare systems in the United Kingdom and Taiwan, where an American recently went to the emergency room with a serious condition and ended up only paying $80 for his excellent care instead of the tens of thousands he would have had to pay here.

At some point, Baier decided to poll the audience and asked them to raise their hands if they have private insurance.

“I want to ask the audience a question,” Baier said. “If you could raise your hand here, show of hands of how many people get their insurance from their work, private insurance, right now, how many get it from private insurance.”

A lot of hands went up, including Sanders’ hand because he has to purchase insurance through Obamacare.

Baier then asked if they would trade their private insurance for government-run healthcare.

“Okay, now of those, how many are willing to transition to what the senator says, a government-run system?” he asked.

Much to the network’s likely disappointment and Baier’s surprise, just about everyone who raised their hand in answer to his first question kept their hand raised and the crowd let out a cheer in support.

Bret Baier just polled the Bernie Town Hall audience who would be willing to switch to #MedicareForAll. It backfired spectacularly. pic.twitter.com/dQJ9gfQ137

Clearly, Americans are ready for universal healthcare, which is causing panic among Republicans who know they are incapable of offering an acceptable alternative. One of the main issues that hurt Republicans in 2018 is healthcare, and Democrats have the high ground heading into 2020.

And Sanders is currently leading Trump in the polls, which makes his support of universal healthcare a big reason why. If Republicans want to survive the 2020 Election, they are going to have to actually come up with good ideas to pitch to voters instead of continuing to oppose anything and everything that helps the people. Because their refusal to jump on the universal healthcare bandwagon is crippling them, and this town hall proves it.